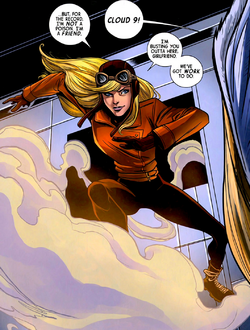 Abigail "Abby" Boylen was a very shy girl from Evanston,[5] Illinois. She came in contact with an alien gas who let her control it, allowing her to fly, among other capabilities,[6] and taking the codename Cloud 9.[4] However she had no interest at the time to be a hero, merely to fly.

One day, Abigail was taking her new powers out for a spin when she was detected by aircraft pilots, informing her that she was in infraction towards the F.A.A..[4]

She evaded them but was spotted and stopped by War Machine.[4] Her identity was classified[7] and she was taken to Camp Hammond (Stamford, Connecticut), along with Trauma, Bengal, Ultragirl, Slapstick, Hardball, Thor Girl, Rage, Komodo and Armory. There, they were welcomed by "Yellowjacket (Dr. Hank Pym") and drill sergeant Gauntlet, who explained them that they were to be trained on the use of their powers and given licenses as members of the Initiative.[4]

Once at the base, she was immediately insecure about her fitting in the Initiative, and also self-conscious about her body, comparing it to the other girls' bodies there who she felt looked like they came right out of Vogue magazine. During a uniform exchange, Abigail accidentally slipped into the boys' showers and was found by fellow new recruit MVP. He took a liking to Abigail and watched her train. However, training with another new recruit Armory went horribly wrong. MVP was accidentally shot by one of Armory's blasts while he was trying to protect Abigail from harm. Armory was grounded from "superhero-ing" and expelled out of the base, while Hardball, Komodo, Trauma, drill sergeant Gauntlet, Camp scientist Baron von Blitzschlag and Abby herself was kept under secret by Henry Peter Gyrich, who refused to admit that kind of tragedy happened at Stamford. Trauma, Hardball, and Abby assisted Armory's departure of the camp, along with Rage who asked them an explanation that they weren't allowed to share.[4]

Armory's expulsion and MVP's death quickly became a burden to the group, and Abby's fear caused Trauma to turn into a corpsified version of MVP blaming her. Trauma was stopped by Pym and Justice, while Gauntlet took care of Cloud 9, seemingly shocked.[3]

Abigail was one of the cadets sent on an emergency mission to protect the President from an assassination attempt by Hydra, who had deployed a Terror-Carrier over Crawford, Texas, in order to target Prairie Chapel Ranch ("the Western White House"). Being the top marksman among the Initiative cadets, she was given a pulse rifle, and once sent to the battlefield through the Negative Zone Portal, and took down an Hydra Viper Jet and his pilot, realizing the gravity of the situation. Once the Terror-Carrier down, Pym was decorated by the President at the White House Rose Garden, and some of the trainees including Abby, Hardball and Komodo were present to the ceremony.[3]

After that battle, Cloud 9 lost faith in herself, and shooting instructor Black Widow was surprised to see her sniper abilities weakened.[8]

She also started counseling sessions with Justice,[8] and along with him, they went to the Van Patrick Farm at Liberty, Kentucky. On the way, they had time to discuss the dealing of losses. Once there, they discovered a well-alive MVP,[1] in fact a clone produced by the Initiative.[9] Shocked by that discovery, the two heroes were forced to join the fight against a returning Hulk.[1]

Abigail later learned that the Initiative had secretly made clones of MVP and that one of them, who dubbed himself KIA, had gone on a rampage. She and a group of fellow Initiative members traveled to the Van Patricks' home, attempting to convince the first MVP clone to download his memories into a device that would transmit them into KIA's brain, essentially reprogramming KIA, but possibly leaving the first clone mindless. Cloud 9 managed to distract KIA by playing on the latent memories of the original MVP and kissing him, allowing her to fill his lungs with her vapor. The MVP clone, rather than wipe his own mind, instead placed the helmet on KIA, leaving him an empty shell. Abby and the clone decided to start things over, with Abby acknowledging that the clone was not the MVP she had known.

When Cloud 9 completed her Initiative training, she was assigned to Freedom Force, the Montana team, alongside Challenger, Think Tank, Equinox, and Spinner.[10] When Equinox was exposed as a Skrull infiltrator, Cloud 9 killed him.[2]

Initiative instructor Tigra expressed concerns about Cloud 9 developing an outwardly cold attitude towards killing in the line of duty after graduating to active service. Believing that Cloud 9 was merely bottling up her emotions rather than dealing with them, Tigra worried about the psychological trauma that could result if Cloud 9 was forced to confront those feelings.

Following the repeal of the Superhuman Registration Act, Captain Steve Rogers requested her presence at Stark Tower. He asked her to become one of the trainers at the Avengers Academy. Instead, Abigail tore up her card, dumped her costume at Rogers' feet and flew off in her civilian clothes, free to do anything she wanted.[11]

When the riots resulting from the Serpent began, Cloud 9 decided it was time to become a hero again, this time by doing things her way. [12]

Later on, Cloud 9 joined Jeremy Briggs in his project to remove superhuman abilities from the population. During a confrontation with the students of the Avengers Academy, she expressed contentment with her new job and expressed that she had no desire to be a hero.[13]

At the time when Hydra took over the United States, Cloud 9 appeared as a member of the Underground.[14] Since SHIELD was dismantled in the aftermath, Leonardo da Vinci created a program to help rebuild it. Cloud 9 signed up.[15]

Cloud 9 was listed amongst other young heroes by Viv Vision as a new Champions reserve member.[16]

Gaseous Aerokinesis: Cloud 9 is able to generate a cloud-like alien gas,[5][6][17] confirmed to be extraterrestrial in origin.[4][6] She is able to create multiple clouds of the gas and manipulate its shape and movement for a variety of effects. Such as:

She was stated to be below Class 50 in the threat classification of the Initiative.[3]

Formerly a sniper rifle with Adamantium-jacketed bullets,[2] an energy pulse rifle[3] and an automatic grenade launcher.

Like this? Let us know!
Retrieved from "https://marvel.fandom.com/wiki/Abigail_Boylen_(Earth-616)?oldid=6439558"
Community content is available under CC-BY-SA unless otherwise noted.