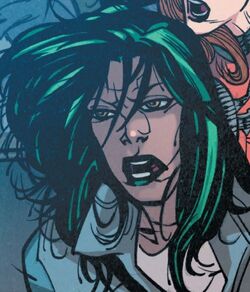 Abby Brand and her friend Skull became Hydra agents to help their terrorist revolution, although she was unsure if she was doing the right thing. Her fellow comrade Scorpio was eventually revealed to be an undercover Nick Fury. This occurred during the time when the Hydra camp where Brand operated was attacked.[1]

After the Hydra leader Commander Crimson used the Power Gem to savagely kill Skull, Abby decided to leave Hydra. Nick Fury offered her on place on his new team of Hydra hunters, the Howling Commandos.[3]

The Dark Ultimates launched a massive global attack in an attempt to conquer Earth in order to, apparently, save it. Nick Fury responded by approaching Monica Chang and presented the newest members of his Howling Commandos, ready to try to stop the Dark Ultimates.[2]

The Howling Commandos made their way to the Maker's base, the Aleph-One, where they assisted the Ultimates in the Dark Ultimates' defeat.[4]

Like this? Let us know!
Retrieved from "https://marvel.fandom.com/wiki/Abigail_Brand_(Earth-1610)?oldid=6122603"
Community content is available under CC-BY-SA unless otherwise noted.