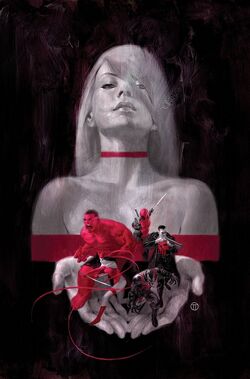 Mercy is a human who received powers through unknown methods. She claimed to be an alien from another planet, but no evidence has appeared to support this. One day, Mercy took it upon herself to kill those who lacked the strength to commit suicide from despair, believing that she was doing them a favor.[4]

Mercy was an enemy of the Hulk, as he was the only person Mercy had been unable to 'help'. No matter how bad things would become, the Hulk would never stop fighting because he must always be the strongest one there is.[2]

She was eventually captured and held in an unknown military base until she was released on the condition that she joined Thaddeus Ross' newly formed Thunderbolts team.[5]

During Thanos' invasion, Mercy went rogue, and the Thunderbolts decided to get rid of her once and for all. The Leader suggested to send her to a place she wouldn't bother them, Hell, as it was full of souls in despair.[6] The plan failed as the Thunderbolts accidentally teleported themselves to Hell, but after making a deal with Mephisto, they managed to leave Mercy stranded in Hell.[7]

Mercy possesses various powers such as:

Like this? Let us know!
Retrieved from "https://marvel.fandom.com/wiki/Abigail_Wright_(Earth-616)?oldid=5477579"
Community content is available under CC-BY-SA unless otherwise noted.