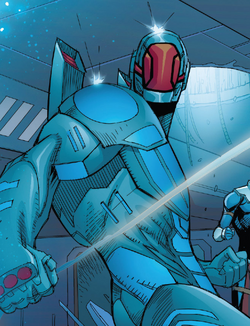 Oh, get real, would you? I've got all the weaponry of a fighter plane - and then some. You're a big ribbon.

Abner Jenkins aka the Beetle and MACH-I-X was an American AMT (Aircraft Maintenance Technician) with a licensed technical qualification for carrying out aircraft maintenance. A brilliant engineer and pilot but he became bored in his low-paying job. He created the Beetle Armor and decided to test his skills hoping to become a mercenary for hire.[13] He failed numerous times but was later recruited in the Masters of Evil[14] and finally going straight and joined the Thunderbolts as MACH-1.[15]

Abner Jenkins was born in Baltimore, Maryland. He became a mechanic for an aircraft producer. Tired of his boring, low-paying job and not getting promotions he thought he deserved he decided to strike out on his own in search of fame and fortune. Using a suit of armor, Jenkins became the Beetle.[13]

His first battle was against the Human Torch and the Thing, hoping that defeating half of the Fantastic Four would make him an overnight sensation.[13] Spider-Man in particular was a constant problem, whom he first encountered while attempting to kidnap the Human Torch's girlfriend Dorrie Evans.[16] He was among the many costumed menaces assembled by Doctor Doom to disrupt the wedding of Reed Richards and Susan Storm.[17]

At one point, the Beetle was mentally dominated and recruited by the Collector to serve as his unwilling agent. Under the Collector's domination, the Beetle faced the Avengers.[18] He later became a member of the group of super-villains who briefly posed as the Defenders in order to confuse the authorities.[19]

After Jenkins and the Tinkerer made several armor upgrades, he had somewhat better success in groups. Egghead who recruited him for his Masters of Evil organization.[14] The Beetle and other Masters of Evil were defeated by the Avengers[20] and arrested.[21] He was targeted by Iron Man during the Armor Wars due to Justin Hammer providing stolen Stark technology. The Beetle organized his own team of super-villainous mercenaries called the Sinister Syndicate. While working with the Syndicate, Jenkins murdered a scientist named Dr. Goulding.[22]

After the disappearance of the Avengers and Fantastic Four following Onslaught's attack, Baron Zemo formed the Thunderbolts.[23] Zemo's plan was to gain the favor or the citizens of New York, then in need of heroes, by posing as heroes in order to gain access to classified S.H.I.E.L.D. files and eventually control the world. Jenkins made a new armor, the Mobile Armored Cyber-Harness, with the help of Fixer and joined the team under his new identity, MACH-1.[15][23]

Jenkins and several of his teammates began to like the hero life and decided to leave their villainous pasts behind. During this time Jenkins and his teammate Songbird began to develop feelings towards one another. Zemo instead outed the Thunderbolts as ex-Masters of Evil members to the public, leaving the new heroes with a public unwilling to trust them.[24] Jenkins and other fugitive members decided to try making the Thunderbolts a legitimate team.[3]

The murder he committed eventually came back to haunt Abe. When Hawkeye took over leadership of the team, he convinced Jenkins to serve out his prison sentence as a gesture of goodwill to the public. While in prison, Jenkins foiled a breakout,[25] an act which brought him to the attention of the government's Commission on Superhuman Activities (CSA). They recruited Jenkins to participate in a sting operation aimed at Justin Hammer. Jenkins agreed, using a newly-designed tank-like armor to operate as the Beetle once more. Hawkeye blackmailed the CSA into allowing Jenkins to remain free, even though the government's records would continue to list Jenkins as incarcerated, in exchange for keeping the CSA's exploitation of Jenkins' secret.[26]

To hide his true identity, Abe started going by Matthew Davis, and was given a new face and the appearance of an African American by Techno (who was then posing as Thunderbolts' machine-smith Ogre). While this change made Songbird uneasy for a time, Jenkins himself adjusted quickly and reestablished himself as one of the team's most confident and capable members. Jenkins created the MACH-2 battle-suit after modifying his MACH-1 armor with the aid of Techno.[27]

When the Thunderbolts uncovered and thwarted a CSA-connected conspiracy to exterminate all superhumans, Hawkeye blackmailed the CSA into giving all the Thunderbolts full pardons in exchange for the group's silence. However, as part of the terms of their deal, they were forbidden from publicly using their superhuman powers or costumed identities. Abe and Songbird started new civilian lives in Colorado. Jenkins found himself employment with the Burton Canyon police department as a tech support specialist.[28]

Their brief respite was shattered when Graviton attempted to take over the world. Jenkins and Songbird agreed to join Citizen V (secretly Baron Zemo controlling Citizen V's body) in attacking Graviton as part of a new team of Thunderbolts. Jenkins was given new armor provided by Citizen V's financiers, the V-Battalion, and called himself MACH-3. Graviton was defeated and the world was saved, but MACH-3 and the other Thunderbolts disappeared in an implosion created by the dying Graviton's power, with the exception of Songbird, who was left behind as apparently the sole survivor.[29]

The Thunderbolts reappeared on Counter Earth. Mach 3 and the Thunderbolts searched for a way to return to their own world. The team entered into an uneasy alliance with their original leader, Baron Zemo, to establish themselves as the leading superheroes of the troubled Counter-Earth. They became renowned for their heroism and were hailed by many to be the world's saviors.[30]

Zemo's Thunderbolts had encountered the effects of a white hole spawned from an abandoned spacecraft, as its engine's radiation began eating Earth from the inside. The Thunderbolts embarked on a plan to combine their powers to punt the alien ship off the Earth and sever the link between the worlds. However, in order to complete this plan, the Thunderbolts needed to be inside the engine-spawned void in order to keep it clear of the real Earth as it closed. By so doing, they would reemerge from the void on the real Earth, forfeiting their roles and place on Counter-Earth. Emerging from the void, the Thunderbolts encountered their former teammates Hawkeye and Songbird, who had formed their own version of the Thunderbolts, who were similarly engaged with the void from the real Earth's counterpart of the spaceship. The two teams of Thunderbolts combined forces to plug the void and shunt the alien ship from Earth.[31]

Jenkins' reunion with Melissa was short-lived. Despite their feelings for each other, he left her to return to prison to finish his sentence.[32] Spending time as a hero seemed to change his outlook on life. After being paroled from prison, Jenkins reformed the Thunderbolts with the funding of Baron Strucker. Any former villains or super-powered individuals who wanted a second chance were allowed to join. Songbird took charge of the team. Abe found himself working with Fixer once again. Abe eventually revealed he always intended to take down Strucker and they succeeded in defeating Hydra's scheme to destroy Manhattan.[33]

During the superhuman Civil War Abe joined the Hero Hunters and oversaw three college students using the previous Beetle armors (the first beetle-themed design, the second streamlined update, and the third tank-like armor).[34] Later, during Norman Osborn's Dark Reign, Abner, alongside Fixer, was working on the Mach V version of the flight armor. One day he met with Songbird who wanted to bring the old band of Thunderbolts back together to deal with the team of killers Osborn had assembled as the new Thunderbolts. Abe pledged to help her and gave her the location of Radioactive Man. Melissa kissed him in thanks before leaving. When Melissa and Black Widow were in danger, he saved them from Osborn's new Thunderbolts with his new Mach V armor.[35]

After the Siege on Asgard, Mach V was supervising Mac Gargan at the Raft after he was unbonded from the Venom symbiote. He was defeated by the Spider-Slayer, who escaped with Gargan to turn him again into the Scorpion.[36]

Abe has no powers. He uses both the Beetle armor and the Mobile Armored Cyber-Harness or MACH armor.

Abe possesses the normal human strength of a man of his age, height, and build who engages in moderate regular exercise. When using the Beetle armor, Abe could lift 1 ton with each arm.

Various weapons within the armor

Like this? Let us know!
Retrieved from "https://marvel.fandom.com/wiki/Abner_Jenkins_(Earth-616)?oldid=6273612"
Community content is available under CC-BY-SA unless otherwise noted.