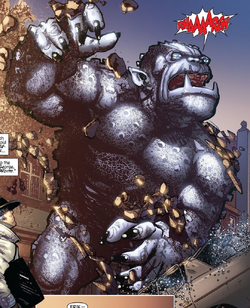 The "Abomination" (so named by Magneto) was a sewer-dwelling mutant from New York City. During Magneto's first time in the city, the Abomination went on a rampage, but Magneto easily defeated him by tying him up with steel beams using his powers. [1]

The Abomination had presumably enhanced strength. He appeared to demonstrate a size-changing ability, as well.

Like this? Let us know!
Retrieved from "https://marvel.fandom.com/wiki/Abomination_(Morlock)_(Earth-616)?oldid=5213563"
Community content is available under CC-BY-SA unless otherwise noted.