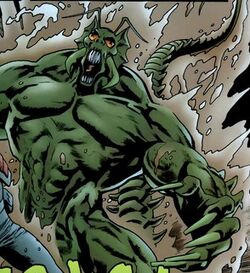 This place Abominite's home! No one else! ... No visitors! Visitors die!

The behemoth called Abominite, who has an insectoid face and a long tail, dwells within the sewers of New Gotham. He is violently territorial and will kill any trespassers. [1]

The new hero Access discovered this the hard way, as Abominite pursued him through the sewers. Abominite cornered him and was about to lay a killing blow, but Access teleported to safety.[1]

Like this? Let us know!
Retrieved from "https://marvel.fandom.com/wiki/Abominite_(Earth-9602)?oldid=4053236"
Community content is available under CC-BY-SA unless otherwise noted.