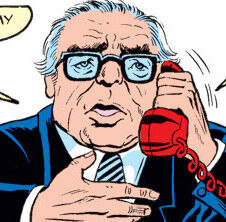 Abe Beame was the Mayor of New York City from 1974-1977. To date all of his appearances in Marvel publications should be considered topical references per the Sliding Timescale of Earth-616.

A person depicted as Beame was city controller (sic.) before becoming the mayor.[1][2]

Abe Beame was depicted as the Mayor of New York City in a propaganda poster. Immediately after this image was seen, foreign terrorist El Tarantula kidnapped a boat asking for one million dollar as ransom. The Mayor, wanting to pay, phoned local press tycoon J. Jonah Jameson and coerced Jameson to lend him the money, threatening to make the city council review Jameson's newspaper Daily Bugle charter.[3] Jameson, who owed the Mayor several political favors,[4] agreed, but admitted he missed the previous mayor.[3] When the situation was solved thanks to the Punisher and Spider-Man, Jameson felt relieved and asked his secretary to phone not the Mayor, but the Governor himself![4][5]

Beame was depicted as the Mayor just after powered-armor users had failed to literally steal the island of Manhattan in an attempt to ask the Governor for ransom, but were stopped by Hercules and Peter Parker. Although Hercules moved Manhattan back to its original position, the Mayor was angry because several bridges and tunnels -connecting the island to the city- had been damaged, and he blamed customed vigilante Spider-Man. Spider-Man and Hercules, unimpressed by the Mayor's tantrum, left him hanging.[6]

When the Shocker caused a number of blackouts in New York City, the Mayor -verbally identified as Beame- promised to solve the situation pronto.[7] The Shocker then sent the city hall a tape with a threat, asking for a million-dollar ransom and an answer in the mid-afternoon TV news, or he would leave the whole metropolitan area without light. The Mayor, graphically depicted as Beame, appeared on TV, played the cassette for the audience and openly refused to pay the ransom, instead reinforcing security in critical infrastructures. Spider-Man, watching the news, was impressed by the Mayor's courage, and soon afterward Spider-Man found and defeated the Shocker, leaving him to the police.[8]

He was depicted as mayor of New York when the Jester attempted to destabilize the city by hijacking the media transmissions, first causing Foggy Nelson to lose his re-election as DA, then framing Daredevil for murder and finally making it seem that the New York City Police Department had gone insane[9].

During the tenure of a mayor depicted as Beame, New York City approached bankrupt due to a huge debt and Beame was forced to deny funds that the Empire State University had asked for, a measure that University Vice-Chancellor Edward Lansky vehemently and publicly opposed.[1] Lansky believed that the crisis was fake and the mayor and several other high charges in the city hall were simply corrupt. Lansky secretly hired El Tarantula to murder Beame in the city hall; and the murderer infiltrated the building with two minions. Spider-Man detected them and took care of the lackeys before they could reach the mayor's office.[1]

Tarantula reached the mayor when the later's assistant Ogilve explained that the city needed sixty million for mid-October and, when both public officers recognized Tarantula because of the cruise hijacking, the mayor believed Tarantula was demanding money and refused to pay. Spider-Man then entered and fought Tarantula, but Tarantula manuevered so that their melee blocked the door. Breaking the impasse, Spider-Man jumped through a window pushing Tarantula with him; but Tarantula grabbed Beame. Spider-Man was forced to let Tarantula escape so that he could save Beame's life.[1] Only later would Spider-Man discover Lansky implication and foil his full scheme, that involved murdering several other people to take financial control over the University.[10]

An unnamed mayor of New York City somehow depicted as Beame[11] was targeted by a conspiracy led by criminal Conquer-Lord, who inteded to replace the former as Mayor with his own puppet candidate Charles "Greely" Thurston.[12] As the Mayor was expected to win re-election by landslide, Conquer-Lord staged a false burglary on Thurston's offices, using seven undercover corrupt policemen in his payroll as the raiders, then slander the Mayor by accusing him. The break-in was stopped by vigilante Moon Knight -who was then falsely accused of deliberately assaulting policemen. Conquer-Lord adapted his plan and decided to murder the Mayor personally using a long-range rifle during the Mayor's fund-raising dinner, one week before the election, with his minions providing a diversion by wreaking havoc on the party. The Moon Knight, also present in the celebration, was unable to prevent Conquer-Lord from shooting the Mayor and escape with a hostage.[13] Fortunately, the Mayor was only non-fatally injured. The Moon Knight told him about Conquer-Lord's conspiracy; the Mayor replied that he was aware of a traitor in NYPD and was trying to find him, also agreeing to exonerate the Moon Knight as soon as he could. The Mayor asked the Moon Knight to stop the Conquer-Lord, which the Knight succeeded at doing. Soon afterward, the Mayor recovered in Mount Sinai Hospital.[14]

The last time Beame was depicted as mayor of New York was when the Frightful Four were holding the Fantastic Four for ransom. In a panic the mayor contacted the current and former Presidents of the United States, and the losing candidate in the last election. These individuals were depicted as Gerald Ford, Jimmy Carter, and Ronald Reagan. [15]

Like this? Let us know!
Retrieved from "https://marvel.fandom.com/wiki/Abraham_Beame_(Earth-616)?oldid=5286197"
Community content is available under CC-BY-SA unless otherwise noted.