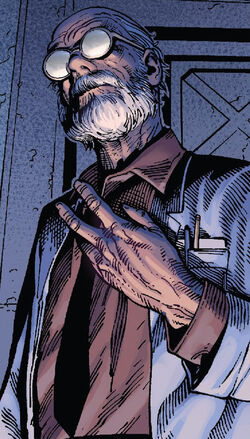 At least I tried! I tried to make something! I tried to change the world! What did you ever do besides kill people?!

Dr. Cornelius, one of the senior scientists for Weapon X, was employed by the mysterious Professor Thorton. Some time after World War II, Wolverine was taken in by the project and Cornelius was assigned with the task of perfecting and using a technique that would bond the indestructible alloy adamantium to human bone cells. This adamantium-bonding process was first created by Lord Dark Wind (Lady Deathstrike's father), but was only put into use after being perfected by Cornelius when he succeeded in bonding Logan's skeleton with adamantium, after which Logan was indoctrinated into the Weapon X assassin program.

Years later, Japanese crimelord Matsu'o Tsurayaba and his allies, including former Weapon X scientist Doctor Cornelius, resurrected the Russian super-soldier Omega Red. In order to stabilize his mutant power, Omega Red required the Carbonadium Synthesizer, a device stolen from him by Team X decades earlier. Omega Red captured Wolverine, who had the location of the C-Synthesizer buried in his memory, and several of Wolverine's teammates in the X-Men. Maverick was hired by former Team X liaison Major Arthur Barrington to prevent Omega Red from obtaining the device, and he tracked another former Team X member, Sabretooth, to Omega Red's location. With Maverick's help, the X-Men were able to defeat the villains, and he subsequently killed Cornelius in an act of revenge.

Revealed to be alive, Dr. Cornelius was found by Wolverine, apparently attempting to recreate his project. After covering his own entire, newly mortal body with liquid adamantium, Logan killed the doctor shortly before dying himself.[1]

Like this? Let us know!
Retrieved from "https://marvel.fandom.com/wiki/Abraham_Cornelius_(Earth-616)?oldid=5471705"
Community content is available under CC-BY-SA unless otherwise noted.