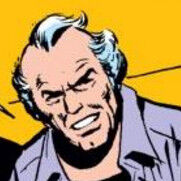 He helped Iron Man seal the Controller in plastic after initial doubts, but when Iron Man explained the Controller's crimes, he participated willingly, as they reminded him of his father who had died in a Nazi concentration camp.[3] He investigated into a supposedly stolen patent for a rocket pack that Tony had designedd, but a competitor comppany already held a patent to.[4] He was the kidnapped along with Tony's secretary Krissy Longfellow by Commander Kraken.[5]

Mordecai Midas blackmailed him to betray Stark, suggesting that he knew the whereabouts of Klein's wife and daughter, whom he had not seen since 1939, when the Nazis invaded Poland and took Klein to a camp. Midas ordered Klein to look for a job at Stark's. Klein intended to help Midas in his attempt to take over Stark International, because Klein had faith in Anthony Stark: Klein believed that Stark would stop Midas and then force Midas to reveal the information. [6]

However, Stark and his bodyguard Iron Man (secretly Stark himself) failed to stop Midas. Once Midas had ensured his victory, he revealed Klein that Midas never had more information on Klein's family but the photographs. [7]

Later, when Iron Man struck back at Midas, Klein, who had no super-human powers or equipment, physically attacked Midas with a bar. Midas punched Klein with super-human strength due to his exo-skeleton. Klein was fatally hurt and he expired soon afterward, but he lived enough to see Midas defeated and to beg for forgiveness with his last breath. [8]

An accomplished scientist and engineer, he developed some of Midas' super-human equipment. He's confirmed as the developer of Midas' "golden touch", which allowed Midas to turn people he touched with his hands in gold, this development was far from perfect: Iron Man sealed his armor to avoid suffering ill effects, and Jack of Heart's exotic powers allowed him to revert the effect.

Like this? Let us know!
Retrieved from "https://marvel.fandom.com/wiki/Abraham_Klein_(Earth-616)?oldid=5893444"
Community content is available under CC-BY-SA unless otherwise noted.