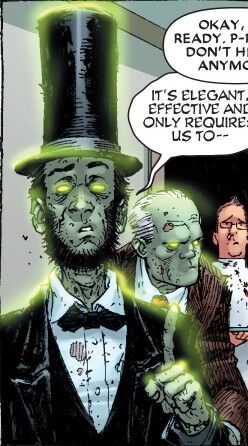 In life, I tried to destroy my enemies by making friends of them... but making corpses of my enemies is so much more fulfilling.

Abraham Lincoln was the 16th President of the United States of America, he was a self-taught Illinois lawyer and legislator with a reputation as an eloquent opponent of slavery.[1]

His election that November pushed several Southern states to secede by the time of his inauguration in March 1861, and the Civil War began barely a month later. Contrary to expectations, Lincoln proved to be a shrewd military strategist and a savvy leader during what became the costliest conflict ever fought on American soil. His Emancipation Proclamation, issued in 1863, freed all slaves in the rebellious states and paved the way for slavery's eventual abolition, while his Gettysburg Address later that year stands as one of the most famous and influential pieces of oratory in American history.[2]

The Slave of Souls encountered Lincoln during his long life.[3]

Doctor Yesterday tampering with time caused Lincoln to appear in the present greeting Michael Jeffries and Mike Peterson before returning to his own time.[5]

In April 1865, President Lincoln was shot and killed by John Wilkes Booth; his untimely death made him a martyr to the cause of liberty and Union. Over the years Lincoln's mythic stature has only grown, and he is widely regarded as one of the greatest presidents in the nation's history.[6]

President Lincoln was later raised from the dead as a Zombie along with George Washington. Together they planned to burn the US to the ground in hopes of starting from scratch. Deadpool tried to stop them at Independence Hall. Deadpool then made a joke about how he was "killed by an actor", in response Zombie Lincoln shot Deadpool in the back of the head, through the left eyeball, "John Wilkes Booth style".[7]

Was a wrestler, with a reputation for strength and audacity.

Like this? Let us know!
Retrieved from "https://marvel.fandom.com/wiki/Abraham_Lincoln_(Earth-616)?oldid=6474738"
Community content is available under CC-BY-SA unless otherwise noted.