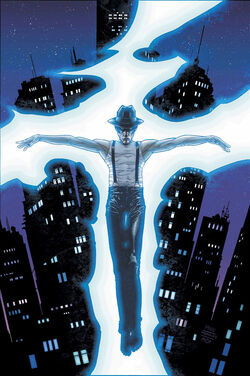 Absolon Mercator's mutant powers first manifested in his native Belgium. After an accident, where he killed a boy bullying his cousin Rubin (Absolon "turned him inside out" and the boy lived for three days in that state), he was sent to the U.S. to live with relatives. Mercator struggled with himself and his identity. He used his powers to 'fix things' such as toasters for money. He was a loner, and normally only left his apartment at night.[1] His only known close friend was Hanna Levy, a mutant who ate insects.[2]

Secretions from a kidnapped mutant called Toad Boy were being sold as designer drugs at clubs. Although mutants who ingested 'toad juice' recovered, humans died violently. Izzy and Bishop investigated. Mister M attempted to help the boy, taking him to his mother. Daniel "Shaky" Kaufman's men went looking for him after viewing a surveillance tape. While being confronted, Mr. M phased his hand into a gunman, unintentionally killing him.[4]

Hannah told him to seek out Izzy for help. He found Izzy's daughter Chamyra the victim of a gunshot wound, accidentally shot by her own brother. He removed the bullet. However, Izzy and Bishop saw him and thought he was attacking her. Bishop absorbed his energy, but it seemed too much for even him to handle. Mercator then fled.[5]

Angry and confused, Mercator vowed he would destroy Mutant Town. He was confronted by Bishop and Izzy again. However, Lara the Illusionist tricked him into thinking he had destroyed the town. Bishop then released the energy harmlessly into the atmosphere. Mercator agreed to turn himself in.[6]

Although charges were dropped against Mercator, he was shot in the head shortly after being released. His powers saved his life, but he spent some time recuperating in the hospital.[7]

After M-Day, Mercator was one of the few mutants who retained his powers. He headed to the Xavier Institute, where he immediately put himself on the radar of O*N*E by easily toppling a Sentinel that was about to crush a caterpillar. They considered him a serious threat especially with the other mutants treating him as a savior-like figure. Mercator also began a relationship with Lorelei Travis after restoring her hair.[8]

Mercator decided to have the The 198 leave the mansion despite the X-Men and O*N*E's attempts to stop them. The face in Johnny Dee's chest quietly declared him a threat that had to be eliminated. Mr. M led his followers to an island which they reached by walking across the water. When the X-Men showed up to try and talk them into returning, Cyclops was promptly attacked by a mind controlled Erg and when he retaliated Mr. M declared he would protect his followers. However, Johnny Dee, under the command of General Lazer, used his "voodoo dolls" to make Leech depower Absolon and then used Magma to annihilate Mr. M.[9]

That night, as Lorelei and Leech watched over Absolon's coffin, they fell asleep. The pair woke to an empty casket. Later, Lorelei and Leech, surrounded by butterflies, told the 198 about their experience: "I can't tell you what we saw. I don't have the words. Absolon never appeared to anyone else, but he did not want them to grieve for him, so he sent them a message. 'Some things do not die... THEY EVOLVE!'"[10]

It is currently unknown if he either died or evolved beyond the need for a physical form.

The current whereabouts of Absolon is unknown. He has been listed in Xavier's files as an Omega-Level mutant (with no alliance to anyone). Later a secluded kingdom in Otherworld, called Mercator, that was recently established has risen (possibly in his name).[11][12]

He was listed by Abigail Brand as a potential replacement for Fabian Cortez for a mutant who can boost, augment, and unify other mutant abilities, such for those who are a part of The Six, but still with his whereabouts unknown.[13]

Absolon Mercator has been stated to be an Omega Level Mutant.[14][11] He has been described to be extremely powerful, even considering the Omega-level Mutants standard.[15]

Subatomic Manipulation: Has the near-limitless psionic ability to manipulate all matter and energy on a subatomic level. He can use his power to reconfigure all forms of matter into different substances and forms and can change matter to energy and back again. He can use his powers to near-godlike effects, a few of which are:

Like this? Let us know!
Retrieved from "https://marvel.fandom.com/wiki/Absolon_Mercator_(Earth-616)?oldid=6466872"
Community content is available under CC-BY-SA unless otherwise noted.