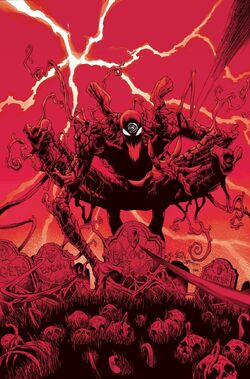 Resurrected by a cult dedicated to the worship of Knull and bonded to the deific primordial Grendel symbiote, Cletus Kasady begins hunting everyone who ever bonded to a symbiote in order to claim their codices - trace remnants of symbiote left in their bodies. Over the course of several months, "Dark Carnage" conquers the Underground City that Venom had once protected and sets up a Spire of living abyss to serve as an amplifier for his new hive-mind;[1] and claims the codices of the city of Doverton,[2] Alejandra Jones,[3] Leonard Elkhart,[4] numerous Weapon V personnel,[5] and countless deceased former hosts whose desecrated bodies the cult deposits in a mass grave.[6]

During the War of the Realms, Dark Carnage sets up a lair underneath Manhattan, establishing a second Spire.[7] Succumbing to Knull's corruption, the Riot, Agony, Phage, and Lasher symbiotes take over a family of four and set out for New York.[8][9] The theft of the corpse of Thaddeus Ross draws the attention of the Hulk, who begins investigating out of concern that something more sinister might be involved and discovers the mass grave, reporting it to the authorities.[10]

Infiltrating Ryker's Island, Dark Carnage kills Lee Price - attempting to frame Eddie Brock - before hunting Eddie and his son down. Despite rebonding to the Venom symbiote, Eddie is outmatched and only able to escape by exploiting the Grendel symbiote's weakness to electricity. Reluctantly allying with Spider-Man, Eddie contacts the Maker - who has built a codex-extracting machine in Rex Strickland's Warehouse and wants to test it on Normie Osborn, one-time host of the Carnage symbiote. Peter and Eddie refuse and set out to retrieve Norman Osborn - who had bonded to the Carnage symbiote as the Red Goblin and now believes himself to be Cletus Kasady - from Ravencroft Institute before Carnage can do so.[6] Anticipating this, Dark Carnage has John Jameson - who he had infected with the Grendel symbiote while slaughtering Doverton - kill the staff and set up a trap.[11] Attacking the institute, Dark Carnage infects the inmates with pieces of the Grendel symbiote to turn them into a horde of four-armed Carnage Doppelgängers, and bonds Norman Osborn to an offshoot of the Grendel symbiote to turn him into a replica of his original Carnage form.[6]

Spider-Man and Venom barely manage to escape and begin searching for the various heroes, antiheroes, and villains who have bonded to symbiotes.[12] Dark Carnage claims Ravencroft Institute as a base of operations and sacrifices Shriek to resurrect the Demogoblin. Misty Knight - who had been captured by Jameson - manages to escape and contacts Iron Fist, who rallies the other heroes who opposed Carnage during his first attempt to conquer Manhattan to rescue her.[11] Deadpool, seeking psychiatric help, comes across Dark Carnage's cult and burns the institute down - forcing Dark Carnage to relocate to his lair under Manhattan.[13][12]

As Dark Carnage's Carnage Doppelgängers rampage across the city, devouring or infecting everyone they come across,[14] Venom barely rescues Scorpion from Osborn but is unable to save Miles Morales from being infected by a symbiote and turned into a six-armed Carnage Doppelgänger.[15] Contacting Captain America, Wolverine, and the Thing, Spider-Man joins them in disabling the Spire underneath Manhattan, while Hawkeye infiltrates the Underground City in San Francisco and disables its Spire.[14] Hunted by the symbiote-infected Freak, Conundrum, and Will O' The Wisp, Deadpool kills them but is attacked by Osborn. Deadpool is saved by Spider-Man, who he allows to be captured in order to follow Osborn back to Dark Carnage's lair - blowing himself up and losing the lower half of his body in an attempt to kill Dark Carnage.[16] The Scream symbiote is resurrected by Dark Carnage and sent after Andi Benton, bonding to Patricia Robertson. When Scream breaks free from his control and protects Andi, Dark Carnage hunts them down and kills Patricia; the Scream symbiote bonding to Andi and helping her escape.[17] Iron Fist's team rescues Misty Knight and frees Jameson from his Grendel symbiote offshoot.[18] Returning home from fighting a Lovecraftian monster in deep space, Captain Marvel is eaten by the symbiote-infected Chewie and confronts a manifestation of Dark Carnage inside her. Carol manages to separate Chewie from the Grendel symbiote - forcing the Flerken to regurgitate her - and is briefly taken over by it, but incinerates it with her cosmic powers; leaving Chewie in the care of Spider-Woman before joining the fight.[19]

While this occurs, Rex Strickland's Warehouse is attacked by Riot, Agony, Phage, and Lasher - who have taken over a family of four.[8][9] Dylan and Normie are rescued by Sleeper, who attempts to bond to Dylan but is captured by the Maker. To save Sleeper, Dylan frees the Life Foundation symbiotes; which merge into Hybrid and take over the Maker.[20] Dylan and Normie are saved by the arrival of Spider-Man's team, and Bruce Banner completes the Maker's machine, killing the Hybrid symbiote in the process.[21]

As the Maker's machine extracts the assembled heroes' and villains' codices, Dark Carnage infiltrates Rex Strickland's warehouse disguised as Eddie Brock, learning Spider-Man's civilian identity in the process, and summons his horde to attack. Frustrated by Eddie's refusal to fight Dark Carnage, the Venom symbiote leaves him and bonds to Bruce Banner, who transforms into the Hulk after being killed.[22] Eddie tasks Spider-Man with escorting Dylan and Normie to safety, arming himself with Captain America's shield and a Jury gauntlet.[23] While Spider-Man fights Osborn in the tunnels below,[24] Eddie frees Miles from his symbiote and learns that Dark Carnage is nearly strong enough to free Knull. Dark Carnage defeats the Venomized Hulk and rips the Venom symbiote off him, absorbing it to assume a new demonic form. Initially despairing, Eddie frees the extracted codices from the Maker's machine and bonds with them in order to pursue and stop Dark Carnage.[23]

As Eddie and Dark Carnage fight in midair and on the rooftops, Cloak arrives with Dagger, Iron Fist, Firestar, Morbius, Deathlok, Captain Marvel, Deadpool, and Scream as backup, turning the tide against Carnage's horde. With Spider-Man and Norman Osborn unconscious, the latter's offshoot of the Grendel symbiote separates from him and attacks Dylan only to be destroyed when Dylan's powers activate. Eddie and Dark Carnage crash through the roof of the tunnel, the latter telling Eddie that he has already lost - regardless of whether he lets Dark Carnage kill his son or kills Dark Carnage to save Dylan, Knull will be freed. Deciding to save his son and reclaim his symbiote anyway, Eddie kills Dark Carnage, takes the Venom symbiote back, and absorbs the Grendel symbiote into it.

With Dark Carnage's death, the Carnage Doppelgängers are restored to humanity, the heroes celebrating this as a victory. However, as Dark Carnage had predicted, Knull is reawakened and destroys Klyntar, seizing control of its constituent symbiotes and turning them into a fleet of symbiote dragons.[25] 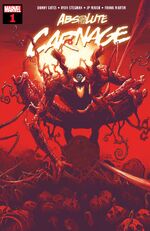 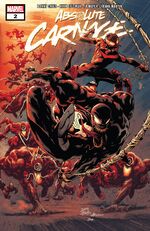 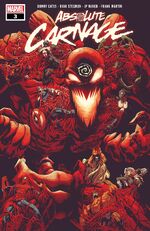 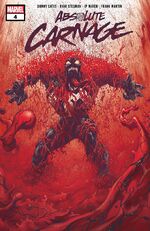 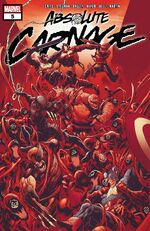 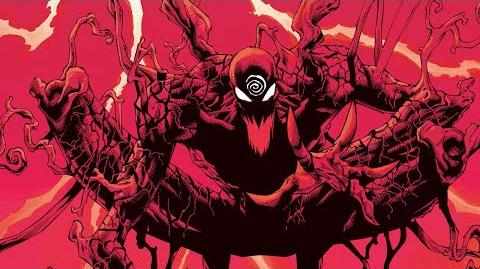 Retrieved from "https://marvel.fandom.com/wiki/Absolute_Carnage?oldid=5188967"
Community content is available under CC-BY-SA unless otherwise noted.