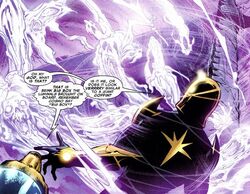 The Abyss is the archenemy of the Luminals of Xarth III. Though they thwarted his plans many times, the Abyss always comes back.

In one last ditched attempt to rid themselves of the Abyss, the Luminals planned to cast him to the ends of the universe. To that end, they came to Knowhere, a small city contained in the severed head of a Celestial. Unfortunately, the Abyss attempted to break out of his prison. Once he made a crack, the Abyss began to unleash his wrath upon Knowhere, turning everyone into zombies. A high-grade telepathic dog named Cosmo, who was Knowhere's security chief, ordered any survivors into the dimension envelope on his tag to protect them.[1]

When Richard Rider, the last Nova Centurion, arrived on Knowhere, he was able to seal the Abyss back inside his prison by using the Transmode Virus to repair his prison's mechanisms, thus temporarily ending his reign of terror.[2]

The Abyss is able to escape from anything, even the most secure prison.

Like this? Let us know!
Retrieved from "https://marvel.fandom.com/wiki/Abyss_(Cosmic_Sorcerer)_(Earth-616)?oldid=5255793"
Community content is available under CC-BY-SA unless otherwise noted.