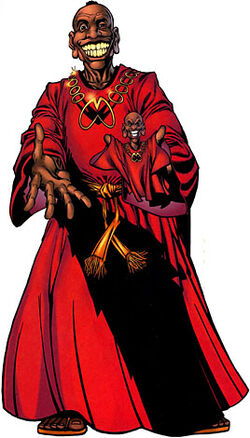 It has been suggested that the man now known as Achebe was once an unnamed peasant farmer, living with his family in the small African country of Ghudaza. One day, rebel guerrillas from the neighboring country of Ujanka were forced over the border onto Bob's farm. Achebe helped to nurse the fighters back to health, but his wife fell in love with the rebels' leader. The guerrillas took his wife with them when they left, leaving Achebe for dead after stabbing him 32 times and his farm razed to the ground. Achebe was driven insane with hatred, and he offered his soul to make a deal with the Devil. He then proceeded to track down anyone associated with his wife and the rebels, killing each one by stabbing them 32 times and razing their livelihoods to the ground.[1]

It is known that Achebe attended Yale University, acquiring multiple degrees. He then returned to Ghudaza and, by allying with certain factions of United States intelligence, the Russian mob, and the members of the Volcan Domuyan Secret Service, helped to erupt the country into ethnic wars that forced thousands of refugees into Wakanda.[2] Achebe placed himself in a refugee camp that emigrated to the African nation of Wakanda, ruled by the hero Black Panther.[1] At the time, the Black Panther was embroiled in an investigation involving an extensive scandal caused by Achebe with a non-profit community services organization supported by Wakanda. The investigation grew problematic, requiring the Black Panther to stay in the U.S. for some time.[3]

He soon discovered, however, that the scandal was a ruse to lure him away from Wakanda. During this time, Achebe was able to topple his government in a coup d'etat, aided by Ramonda, the Panther's own step mother, and Mephisto, who craved T'Challa's soul. The Panther was taken into Mephisto's realm, where he ultimately conquered the demon and severed the demon's relationship with Achebe. Nonetheless, on his return he was stalemated by Achebe, who remained in power in Wakanda alongside Ramonda and forced the Black Panther to return to the United States.[4]

At one point, Achebe incited a riot outside an official state reception for the Black Panther, requiring his allies in the Avengers to help diffuse the situation.[5]

Eventually, without the support of a powerful demon, Achebe slipped further into insanity. He started talking to a hand puppet named Daki and began to follow his own agenda, rather than the one his allies had laid out for him, betraying Ramonda by beating her unconscious. He gained access codes from Ramonda for Wakanda's last line of defense, giant panther robots called Prowlers, and sent them to attack Wakanda. The Black Panther and his entourage arrived just in time to deactivate the Prowlers and oust Achebe from power.[6]

Achebe is an extremely gifted genius with many talents such as ventriloquism. Achebe is also proficient in the use of explosive devices as well as being athletic enough to mimic the movements of the Black Panther.[7] Befitting his credentials, Achebe is also a skilled politician, being able to successfully coordinate a governmental coup.

Like this? Let us know!
Retrieved from "https://marvel.fandom.com/wiki/Achebe_(Earth-616)?oldid=6076034"
Community content is available under CC-BY-SA unless otherwise noted.