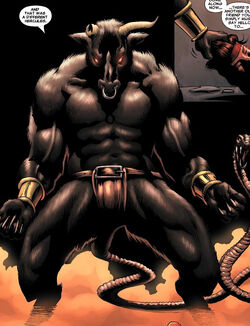 Achelous was an Olympian river god living in ancient Greece, and the son of the Titans Oceanus and Tethys.[1]

His chosen form was of a giant bull. He fell in love with a mortal named Deianira. Deianira was also an interest of Hercules and so, Achelous challenged him for Deianira's hand in marriage. As the battle raged on, Achelous transformed into a bull and charged at Hercules. He avoided the attack and shattered Achelous' right horn.[2]

With a hatred towards Hercules, Achelous agreed to help Eurystheus, Hercules' cousin and bitter rival.[3] They returned from Hades to challenge Hercules again, but once more failed against their bitter foe.[4]

Superhuman Strength: Achelous strength is above the average Olympian and is sufficient to enable him to lift 90 tons. He had a strength approaching that of Hercules.

Superhuman Speed: Achelous' superhumanly strong legs allow him to run and move at speeds greater than the finest human athlete.

Superhuman Agility: Achelous' agility, balance, and bodily coordination are enhanced to levels that are beyond the natural physical limits of the finest human athlete.

Superhuman Reflexes: Achelous' reflexes are similarly greatly enhanced and are much more superior to the reflexes of the finest human athlete.

Superhuman Durability: Achelous is highly resistant to physical injury. He is capable of withstanding high caliber bullets, falls from great heights, powerful energy blasts, and extreme temperatures and pressures without sustaining injury. He is also capable of surviving, unprotected, in the vacuum of space for a brief period of time. His resistance to injury surpasses the majority of his race.

Magical Energy Manipulation: Achelous has presumably the ability channel mystical energy to teleport and create energy blasts, but this was not show yet.

Like this? Let us know!
Retrieved from "https://marvel.fandom.com/wiki/Achelous_(Earth-616)?oldid=5241062"
Community content is available under CC-BY-SA unless otherwise noted.