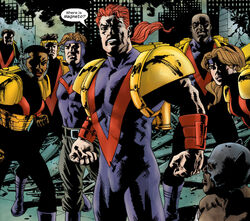 Base of Operations
Asteroid M
Affiliations

Little was detailed about the Acolytes' lives before the zombie plague arrived on Earth-2149, however it can be presumed to have followed much the same path as their Earth-616 counterparts.

The Acolytes (Fabian Cortez, Joanna Cargill, Lisa Hendricks, Reynolds, Burns and several unnamed members) and a surviving X-Men member Forge were among the few survivors hiding in the third Asteroid M. After Magneto (who appeared to be the only mutant left uninfected on Earth) helped Reed Richards from Earth-1610 and the other three survivors escape using Reed’s machine, he destroyed the machine, so the zombies could not use the machine to travel to Earth-1610. He was then contacted by the Acolytes, who offered to send him a shuttle. Magneto, however, told them to wait until he was out of New York City, but was shortly thereafter killed by the zombies.

Upon returning to Earth, the Acolytes couldn’t find Magneto, but discovered a still-living Black Panther and zombie Wasp “head”. Cortez recognized that the Black Panther was a human and alive, but the other Acolytes thought it was a trick, because Panther was also carrying the zombie Wasp head. Cortez warned his teammates to stand down, because they didn’t know anything about the Panther, so they couldn't do anything yet.[1]

Burns disagreed and moved to kill Panther. In self-defense, Black Panther flung the Wasp head at Burns, and it killed him with a bite to the jugular. The other Acolytes started fighting Panther, but Cortez ordered everyone to stop fighting immediately. Panther and Cortez agreed to go to Asteroid M. The Acolytes realized they didn’t have much choice and complied with it, but they wanted to kill the Wasp first. Black Panther refused, because he wanted her to come to Asteroid M with them. Even Cortez wasn’t so sure about it, but accept to take the Wasp with them.

After the Acolytes and Black Panther arrived on Asteroid M, Reynolds decided to study and learn more about the zombies by using the Wasp as a specimen. Reynolds said that he could maybe even find a cure. Later, Forge arrived and introduces himself to Panther.[2]

After all those years the acolytes survived in New York and renamed it New Wakanda, with T'Challa and Lisa Hendricks as their leaders, creating families and finding other survivors. Though dealing with the return of the zombie galacti, they were able to send them to another universe, along with T'Challa that was zombified. Malcolm Cortez promissed to kill T'Challa's grandson when he became older, also revealing he killed T'Challa's son, since he wants to be the king.[4]

Weapons: Many Acolytes have used energy rifles and other guns in the past.

Retrieved from "https://marvel.fandom.com/wiki/Acolytes_(Earth-2149)?oldid=5543988"
Community content is available under CC-BY-SA unless otherwise noted.