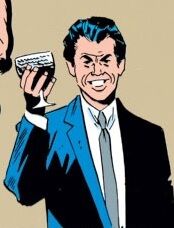 Gallery
Real Name
Unknown
Current Alias
Actor
Aliases
Nikita Khrushchev, Sir Reginald, Tony Stark, Numerous others whom he has impersonated
Affiliation
Neo-Soviets, agent of the the former USSR; former partner of the Red Barbarian
Base of Operations
Mobile
Status
Living Status
Alive
Identity
Secret
Citizenship
Soviet
Marital Status
Single
Occupation
Industrial Spy and Saboteur
Characteristics
Gender
Male
Hair
Black
Origin
Origin
Human. Next to nothing is known of the past of the man known only as the Actor. He was first seen when he appeared before the communist general known as the Red Barbarian.
Reality
Earth-616
Creators and Appearances
Creators
Stan Lee, Robert Bernstein, Don Heck
First Appearance
Tales of Suspense #42
(June, 1963)

The communist general known as the Red Barbarian had been unsuccessful in obtaining the plans for a Disintegrator weapon under construction at Stark Industries. The Actor appeared, posing as Nikita Khrushchev, throwing the Barbarian off guard, but then revealed himself and offered his aid. The Actor further demonstrated his skill in disguise and impersonation, and the Barbarian sent him to replace Tony Stark himself, to gain the plans.

The Actor traveled to the Unites States, and, disguised as Stark, easily entered Stark Industries. There he succeeded in not only obtaining the plans, but in discovering the fact that Stark himself was Iron Man. The Actor decided to keep the identity a secret in case he ever needed an ace in the hole to redeem some blunder. The Actor returned to the USSR and left his agents to terminate the real Tony Stark, who had been sent away on a false meeting. Stark, as Iron Man, overcame the Actor's agents, and forced them to reveal their actions and plans. Iron Man caught up with the Actor by using a rocket to arrive in the USSR minutes before him. Iron Man ambushed his car, and retook the plans for the Disintegrator. Iron Man then traveled to the Red Barbarian's base, posing as the Actor. Iron Man told the Barbarian that the briefcase was booby-trapped and couldn't be opened for another four hours, and then left, returning to the USA. The real Actor returned to the Red Barbarian, hoping his news of Iron Man's real identity would allow him to be forgiven for failing to gain the plans to the weapon. However, the Red Barbarian saw that the Actor didn't have the plans, and when the Actor said he nothing about the time locked brief case, the Red Barbarian refused to believe the Actor and had him shot as a traitor. [1]

The Actor was later revealed to not have been killed, working, again, under the command of the Red Barbarian as part of the Neo-Soviets, a group of former Soviet agents. The Actor was able to assist in capturing Iron Man (Tony Stark) by impersonating his best friend James "Rhodey" Rhodes only for his ruse to be broken when Stark punched him out in anger at the seeming betrayal.[2][3]

Impersonation: The Actor was a master of impersonation. He could adjust his own facial structure so that with a little make up and perhaps a wig, he could impersonate almost anyone. He could perform rapid changes, duplicating the appearance of others within a few minutes after seeing only a photograph of that person.

Espionage: The Actor was also skilled in espionage, and had some degree of training in armed and unarmed combat. He sometimes worked with other communist spies or soldiers.

The Actor possessed the normal human strength level for a man his age, height, and build who engaged in moderate regular exercise

Like this? Let us know!
Retrieved from "https://marvel.fandom.com/wiki/Actor_(Spy)_(Earth-616)?oldid=4935047"
Community content is available under CC-BY-SA unless otherwise noted.