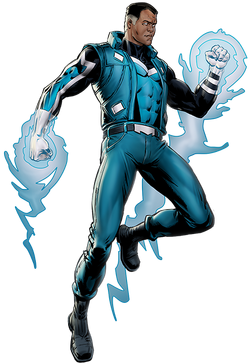 Dr. Adam Brashear gained incredible powers over antimatter after he was exposed to an unexpected explosion by an experimental antimatter reactor. Donning the superhero identity of the Blue Marvel, Adam became one of the most popular heroes of his time, but when his identity and race became public after a deadly fight, he was asked to step down and retire. Disillusioned, Adam went into seclusion and focused on academia, becoming a tenured professor and family man. When Adam's friend and arch-nemesis, the Anti-Man, returned, it brought Adam out of retirement. From his secret base, the Blue Marvel watches over Earth, unable to return to a normal life and is continuously drawn into a life of superheroics.[1]

Anti-Matter Energy Absorption: Theoretically, it seems to be the main source of Blue Marvel's power. This source of power is the energy released from anti-matter which derives from the inter-dimensional universe called the Negative Zone. Anti-matter is the same as normal matter except that the sub-atomic particles are the opposite charge. Adam Brashear is the first human anti-matter generator and reactor. The experiment he gained his powers from renders his form unaffected from anti-matter.

Flight: Blue Marvel flies by manipulation of gravitons, manipulation of magnetic fields, control of his absolute molecular movement, and utilizing his superhuman speed. Blue Marvel can fly far beyond supersonic speeds. He has been seen flying into space unaided under his own power

Super-Genius Intelligence: Adam Brashear is a genius in the field of theoretical physics and has made extraordinary strides in the study of antimatter.

Master Combatant: He has been trained by the US Marines in armed and unarmed combat.

Like this? Let us know!
Retrieved from "https://marvel.fandom.com/wiki/Adam_Brashear_(Earth-12131)?oldid=6057229"
Community content is available under CC-BY-SA unless otherwise noted.