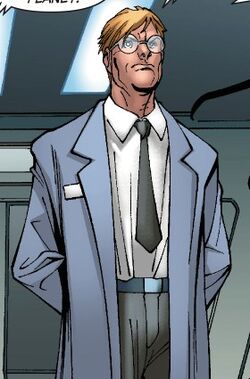 Adam Harkins was the head of the Facility, the organization responsible for creating X-23. He had dealings with the Purifiers and ordered the kidnapping of Mercury so that he could use her skin to create Predator X, a deadly mutant-hunting monster specially designed to find and kill the Mutant Messiah. When the New X-Men and the X-Men raided the Facility to save Mercury, Harkins managed to escape.[1]

Later he again worked with the Purifiers, creating a Choir of angelic warriors by copying the wings of Archangel.[2] Even though Archangel killed every member of the Choir, Harkins escaped unharmed. Some time later, however, his agent Kimura, under the mental control of Emma Frost, tried to kill him. He somehow escaped with a limp and managed to free Kimura from the mind control.[3]

When the Facility managed to capture X-23, Harkins ordered Kimura to take a DNA-sample from her so that the Facility could create more clones of X-23. When X-23 escaped and went berserk through the Facility, Harkin feared for his life and called for Kimura to protect him. Kimura managed to temporarily subdue X-23, but when Harkins wanted X-23 alive Kimura betrayed him and shot him in the head.[4]

Like this? Let us know!
Retrieved from "https://marvel.fandom.com/wiki/Adam_Harkins_(Earth-616)?oldid=5134356"
Community content is available under CC-BY-SA unless otherwise noted.