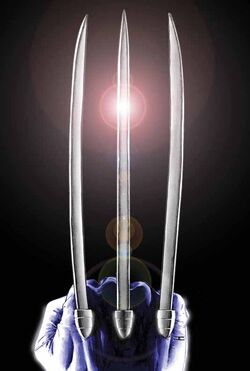 Adamantium is an extremely rigid steel-based alloy that is virtually indestructible.[1] A sufficient amount is capable of surviving multiple nuclear explosions or a blow from the most powerful superhuman with no damage.[1] A blade of pure, primary Adamantium is capable of cutting almost any known substance, with the known exceptions of Adamantium itself and Captain America's shield.[1] The ability to slice completely through a substance with an Adamantium blade depends upon the amount of force being exerted and the hardness of the material in question.[1] Adamantium's molecular integrity makes for an extremely hard metal capable of drilling with greater effectiveness than Vibranium.[1] Furthermore, after several years of additional testing and research, MacLain eventually released his sole supply of Adamantium to the US government who had the Avengers, notably Thor and Iron Man unleash their full power against it, confirming it to be essentially indestructible.[1]

Creating even a small amount of Adamantium is astronomically expensive, and only a few people know the complete formula.[1] Adamantium is created by mixing certain chemical resins together.[1] The exact composition of these resins is a closely guarded secret of the United States government.[1] When these resins are mixed and kept at a temperature of 1,500 degrees Fahrenheit, the resulting liquid can be cast or worked into a particular shape.[1] After an eight minute 'flux period', the mixture sets and becomes solid regardless of temperature.[1] Its molecular structure is extremely stable, and its shape can only be altered by precise molecular rearrangement.[1] However, due to the sheer bonding strength of Adamantium, there are few known forces capable of altering its molecular structure.[1]

There are very few substances known that are harder than Adamantium, but one is Dargonite.[2]

Some Adamantium is made by Adametco.[6]

Hercules, the demigod of Greek myth, wielded an enchanted golden mace, which (according to legend) was made of Adamantine and supposed to be indestructible. Inspired by this myth, Dr. Myron MacLain sought to create an indestructible alloy for the American side during World War II. At one point he fell asleep at his lab bench, and the metals he was working with somehow bonded together. This mysterious alloy--a combination of steel, Vibranium, and an unknown catalyst--created a material stronger than any yet known. However, without knowing the exact ingredients and their proportions, MacLain could never duplicate the process. The sample was worked into a disc, which became Captain America's Shield. MacLain's later attempts to duplicate the material included a formula without Vibranium, which resulted in the creation of True Adamantium, which is almost as strong as Captain America's shield.[7][8]

Although True Adamantium is thought to be indestructible, there are at least two known examples of the alloy within the Earth-616 reality sustaining damage without molecular manipulation. The first involved Thor focusing all of his strength into striking a small cylinder of Adamantium with Mjolnir, which only slightly dented.[8] The second incident involved a battle between Ultron and the Hulk. During the fight, the Hulk punched the robot with enough force to slightly dent it.[9]

Because True Adamantium is exceptionally difficult and expensive to create, various researchers found a more cost-effective way to duplicate it, at the expense of quality and durability. This alternate version, referred to as Secondary Adamantium, is considerably stronger than even titanium and is resistant against most assaults. However, assaults from sufficiently powerful weapons or beings can warp or break it.[10]

This is the original Adamantium created by Dr. MacLain. Proto-Adamantium is the official name for the metal that makes up Captain America's Shield.[1] It has never been recreated and is the absolutely most indestructible item in all of existence. It has only ever been damaged or destroyed five times: by Doctor Doom with the powers he stole from the Beyonder[11], by Thanos with the power of the Infinity Gauntlet[12], by Molecule Man and his total control over matter[13], by Thor wielding the Odin-Force [14]and by the Serpent after augmenting his strength with the fear of people from all over the world.[15]

Also known as Primary Adamantium, this is an attempt at the recreation of Proto-Adamantium. This is the Adamantium present in Wolverine. It is nearly as strong/durable, but unlike Proto-Adamantium, Primary Adamantium is possible to be reproduced. Only beings with godlike powers (such as Rune King Thor) or with strong magnetic powers (like Magneto)[16] can manipulate Primary Adamantium. Otherwise, it is completely indestructible to all forms of attack. Being this strong, it is very rare and expensive to create/manipulate and is top secret in the US government, though it has shared it with some of their "allies". Once liquid Adamantium cools and hardens, it can never be manipulated again,[17] although it can be destroyed by Antarctic Vibranium, which dissolves all metals.

This is much easier to work with, making it much more cost effective though at the expense of its strength. Secondary Adamantium also called Adamantium Steel, was created retroactively after too many instances of the supposedly-unbreakable metal Adamantium getting broken were written. Someone with considerable superhuman strength, such as Thor, can break it or warp it by fully exerting their strength.[10]

In the Earth-1610 reality, Adamantium is still a highly durable alloy but it does not share the indestructible properties of its mainstream counterpart. For example, the Hulk was able to break an Adamantium needle,[19] and also rip Wolverine's body in half who was bonded with Adamantium inside his skeleton.[20] Another incident regarding Adamantium's durability involved Sabretooth; he possesses four Adamantium claws implanted within each forearm, through circumstances yet to be revealed, one of the claws implanted within his left forearm is broken. Lady Deathstrike, possessing an Adamantium laced skeleton, had her neck broken during a battle with Longshot when he used his ability to affect probability. Valkyrie and George Stark destroyed Captain America's Adamantium shield.[21] The material is also highly effective in blocking telepathic probes, a trait that Adamantium in the Earth-616 reality does not possess. Aside from being highly durable and effective at blocking telepathy, nothing else about Ultimate Adamantium has been revealed. It isn't known when Adamantium was first created, who is responsible for its creation, and what the properties and processes required for making it are. As a result, it isn't even known if Ultimate Adamantium is created in the same way as the Earth-616 version.

On one occasion, Vance Astro of the 31st-century Guardians of the Galaxy of Earth-691 was wounded in a battle with the warlike alien Stark. The alloy suit that protected Astro (Earth's first interstellar astronaut) during his trip to Alpha Centauri was damaged. His teammates repaired the damage by applying a flexible Adamantium cast to his arm and chest.[22]The most likely conclusion is that Earth-691 found a way to create Adamantium cheaply and quickly and in a mesh or flexible form.

Much like his Earth-616 counterpart, Wolverine has had Adamantium bonded to his skeleton. However, the history of the material differs greatly from Earth-616. In this reality, Adamantium appears to be at least partially composed of an unknown element from a meteor that crash landed in Africa. William Stryker gathered the material and through unknown means created Adamantium.[25]

The Adamantium itself appears to function like Earth-616 Adamantium. It appears to be mostly indestructible, and must be super-heated in order to be malleable[26], but appears to permanently solidify within seconds of being removed from heat. Also, due to its sheer density and molecular structure, adamantium appears to retain its solid form.

This type of Adamantium appears to lose its durability when expose to extreme heat, as the Silver Samurai was able to cut Wolverine's claws off with a super-heated Adamantium Katana, though this make sense as it's a call back to Stryker explaining that Adamantium is malleable when super heated but becomes permanently indestructible when cooled. This suggests that Adamantium is only indestructible when at room temperature[26], however, Adamantium will still remain solid even when heated to become white-hot[26], as Stryker also stated that Adamantium must be kept heated in its liquid state, otherwise it becomes impossible to alter its molecular structure through any human means or with any other man-made material[27]. Also, in order to damage Adamantium at high temperatures, another object made out of Adamantium will be required[26]. Like its Earth-616 counterpart, Earth-10005 Adamantium is apparently expensive to make. General Munson told William Stryker that he had spent $500 million to bond the metal to Wolverine's skeleton.[25]

Serafina claims that Adamantium has thirteen allotropes, all of which are "unstable, and short-lived, but virulently poisonous". She throws a small device that clamps onto Wolverine's claws and makes them glow green, claiming that it is "Adamantium nine". This causes Wolverine to become stricken, incoherent and collapse.[28]

Carbonadium is a resilient, unstable metal that is vastly stronger than steel, but more flexible than Adamantium. Carbonadium is, in fact, both a more malleable and cheaper version of Adamantium.[29] Due to its malleability, Carbonadium is considerably less durable than True Adamantium though for all practical purposes Carbonadium is nearly indestructible. Omega Red (an adversary of The X-Men, primarily Wolverine) has carbonadium coils which allow him to drain life energies.

It's been proven that only someone with superhuman strength can damage Adamantium with Adamantium, when (Earth-616)

Like this? Let us know!
Retrieved from "https://marvel.fandom.com/wiki/Adamantium?oldid=4463918"
Community content is available under CC-BY-SA unless otherwise noted.