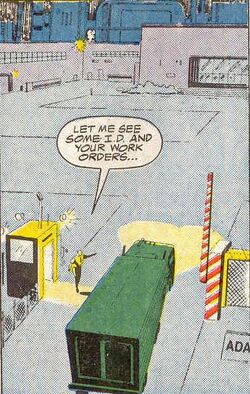 Adametco, a company that does Adamantium bonding, was temporarily taken over by the villainous Overrider. At that time, the company performed the Adamantium coating of TESS-One, a robot the Overrider had stolen, which he planned to use to further his nefarious plans.

Captain America and Wolverine teamed up to defeat the Overrider and release Adametco from his control.

Later, the Absorbing Man broke in the Adametco plant, hospitalizing three security guards, to steal a small piece of Adamantium.

During a Latverian Consulate party, was revealed that Colleen Shore, a manager of Adametco, was a one-time date of Marc Spector

Retrieved from "https://marvel.fandom.com/wiki/Adametco_(Earth-616)?oldid=5248329"
Community content is available under CC-BY-SA unless otherwise noted.