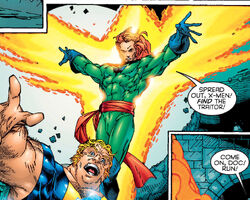 Addison Falk, also known as the Grey King, was one of the nanotech "X-Men" created by Cerebro. Cerebro based Falk and his teammates on mutants in Professor X's files, possibly Jean Grey, Sebastian Shaw, and Magneto in Falk's particular case. Grey King also wore a Phoenix-like costume and had red hair.[1]

Cerebro destroyed Addison and the other nanotech X-Men shortly after their creation.[2]

Like this? Let us know!
Retrieved from "https://marvel.fandom.com/wiki/Addison_Falk_(Earth-616)?oldid=5124831"
Community content is available under CC-BY-SA unless otherwise noted.