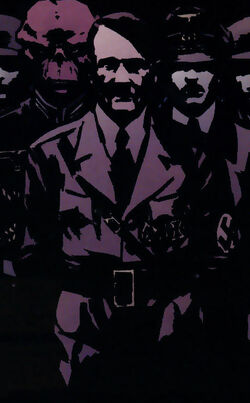 Much of Adolf Hitler's past matched that of his Earth-616 counterpart, however according to the Red Skull, Dr. Abraham Erskine was secretly a member of the Nazi Party. The Red Skull went on to explain that Hitler had funded scientists to work for the Allies, so that their discoveries would aid the Axis powers. The secret plan of the Nazis for the Super-Soldier project was to create a perfect Aryan race, and as such was why they picked Steve Rogers, a scrawny young man with blond hair and blue eyes. Red Skull also went on to explain that the assassin that killed Erskine was originally meant to kill Rogers after his birth, and that Erskine was not the intended target.[1][2]

The Red Skull's claims have not been substantiated, and could have possibly been used as mental torture.

Like this? Let us know!
Retrieved from "https://marvel.fandom.com/wiki/Adolf_Hitler_(Earth-9997)?oldid=5090143"
Community content is available under CC-BY-SA unless otherwise noted.