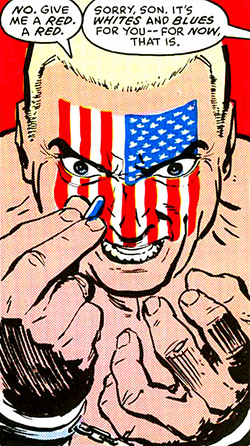 These are a set of three colored placebo pills used by Sgt. Frank Simpson, codenamed Nuke.[2] Each color of pill allegedly generated a different effect. Red pills supposedly increased his adrenaline, white pills ceased the previous pill's effects, and the blue pills relaxed him.[3] The fact that the pills are placebos suggests that Nuke lives in a constant state of increased adrenaline, but doesn't know it. The pills, therefore, trigger his violent behavior, but the effect is purely psychological.[2] However, the Santo Marcan Armed Forces created a plant where they manufactured red pills, which caused bursts of blind violence to the Nuke Platoon.[1]

Will Simpson was part of a private government project experimenting on soldiers. After being injured by Kilgrave, he called for the doctor of the project who gave him the Combat Enhancers to speed up his recovery. Overuse of the red pill can cause Will to become overly aggressive and irrational. When his dosage is at an abnormally high level, his ability to ignore pain can increase to a point where he may not even notice potentially debilitating injuries. The blue pill is also featured, with Simpson saying that without them "your brain will forget to tell your lungs to breathe." True to his word, Trish falls into shock shortly after taking the reds.[citation needed]

Like this? Let us know!
Retrieved from "https://marvel.fandom.com/wiki/Adrenaline_Pills?oldid=6572760"
Community content is available under CC-BY-SA unless otherwise noted.