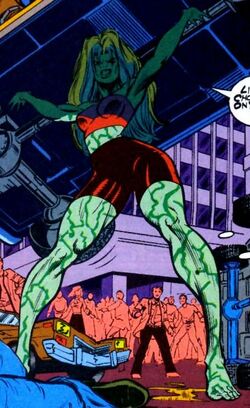 Adrian Lynn was crippled in a deadly car accident. She tried to recover the use of her legs via an experimental adrenal gland transplant. The treatment worked but she lusted for more power and continued the treatment until she gained super-human strength. Seeking revenge against She-Hulk for putting her husband in prison, Adrenazon disguised herself as She-Hulk and implicated her in crimes.[1]

After the serum causes her to have a mental breakdown, she begins to believe she is the Sensational She-Hulk[2].

After having a flashback, the serum overwhelms her and she passes out. She blocks the Sensational She-Hulk from being stunned by guards from the Tombs[3].

Later, after the serum had left her, she accepted her husband's guilt and the Sensational She-Hulk accompanied her to the grave[3].

As Adrenazon she had superhuman strength, speed, durability, and stamina. All of these factors are at sufficient levels to engage She-hulk in battle.

The treatments left her mentally unstable. In her normal form, she is paralyzed from the waist and confined to a wheelchair.

Like this? Let us know!
Retrieved from "https://marvel.fandom.com/wiki/Adrian_Lynn_(Earth-616)?oldid=5213622"
Community content is available under CC-BY-SA unless otherwise noted.