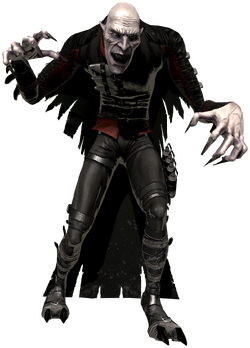 A sadistic circus geek who grew to love the taste of raw flesh... Like his namesake... Call him Adrian Toomes, call him Vulture, call him whatever you want, I'll still call him the bastard who killed my uncle. And not just killed...

Adrian Toomes had a similar history to his Earth-90214 counterpart, except that he survived the battle with the Spider-Man that ended with his counterpart's death.

After obtaining a fragment of the Tablet of Order and Chaos, he was hunted down by the Spider-Man. Despite his numerous attempts to leave Spider-Man in life threatening situations, he always escaped. Vulture used the fragment and gained teleportation, but was still defeated by Spider-Man. Afterward, the depressed Vulture was sent back to a freak show, where he was forced to eat bird food while trapped in a cage, with numerous people laughing at him.[1]

Like this? Let us know!
Retrieved from "https://marvel.fandom.com/wiki/Adrian_Toomes_(Earth-TRN581)?oldid=6059881"
Community content is available under CC-BY-SA unless otherwise noted.