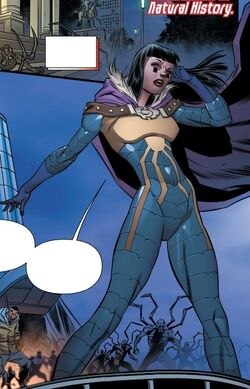 Spider-Queen seemingly had the same history as her Earth-616 counterpart, up until her attempt to conquer Manhattan by infecting the populace with a virus that turned them into spider monsters. The Adriana Soria of Earth-19919 succeeded where her Earth-616 counterpart failed when the Spider-Virus mutated to be capable of infecting superhuman beings. During a battle with Spider-Man's Resistance, Ana captured the majority of their superheroes, effectively disbanding the Avengers.[1]

Learning that when Jack Russell would be free of her control when he transformed into his werewolf form, she tricked him into falsely informing the resistance, now under Agent Venom's command, of a cure located at Horizon Labs. However they purposely fell into the trap, in order to transform some heroes into different monsters: Using the Man-Wolf's gemstone, King Spider was turned into a werewolf; using Morbius' serum, Captain Marvel was turned into a vampire; using the Lizard serum, Spider-Hulk was turned into a Lizard-like creature;[1] and using the Goblin Formula, Iron Man was turned into a Goblin.[2]

Later, the Resistance would break into A.I.M.'s base and rescue both Stegron, using his serum to turn him back into a Dinosaur, and Spider-Man.[2] Desperate, she had Agent 13, Betty Brant, Carlie Cooper, and Mary Jane Watson outfitted with tracking devices and allowed to be spotted by the Resistance. However, they still managed to escape.[3]

Stegron broke into the American Museum of Natural History and utilized his Retro-Generation Ray to reanimate the Dinosaur fossils within the building. Soria found out and sent her army to capture him. However, this was just a distraction, as the rest of the Resistance waged an assault on The Queen's Castle. They were able to pin her down, but before they could decide whether to kill her or not, she mutated into an enormous spider-like creature.[4]

In panic, Spider-Man suggested the resistance retreat from the battle. Finding that unacceptable, Venom rushed at her. He convinced his symbiote to merge with Soria and force her to jump off the tower. She survived the fall, but Stegron and his army of Dinosaurs arrived and ate her.[5]

Seemingly those of the Ana Soria of Earth-616.

Seemingly those of the Ana Soria of Earth-616.

Like this? Let us know!
Retrieved from "https://marvel.fandom.com/wiki/Adriana_Soria_(Earth-19919)?oldid=5742366"
Community content is available under CC-BY-SA unless otherwise noted.