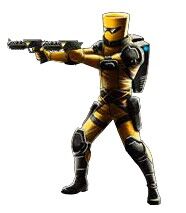 A.I.M. (also known as Advanced Idea Mechanics) is an organization of brilliant scientists and their hirelings dedicated to the acquisition of power and the overthrow of all government by technological means. A.I.M. is always shown to be led by a Scientist Supreme (a high-ranking member of A.I.M.). A.I.M. was organized during World War II as the scientific research division of the subversive military organization Hydra. In the late 1960’s A.I.M. seceded from Hydra because of political differences and began independent operations. A.I.M. first came to public attention when it was incorporated as an international cartel dealing with the development and marketing of new technological products.

It supplied hardware and weapons to governmental and quasi-governmental agencies. Some time after this Col. Nick Fury of S.H.I.E.L.D. exposed A.I.M. to be a subversive organization. Since then, all of A.I.M.’s activities have been covert.

One of A.I.M's major achievements was the creation of M.O.D.O.K. (Mental Organism Designed Only for Killing), an artificially mutated human being with an enormous head and a stunted body who possesses superhuman intelligence and various psionic abilities. Originally an ordinary A.I.M. member, he was selected to be the subject of vast bionic experiments that turned him into M.O.D.O.K.. After being transformed, M.O.D.O.K. killed the leader and seized control.

Several splinter groups have broken off, including R.A.I.D. (Radically Advanced Ideas in Destruction).

Like this? Let us know!
Retrieved from "https://marvel.fandom.com/wiki/Advanced_Idea_Mechanics_(Earth-12131)?oldid=6089893"
Community content is available under CC-BY-SA unless otherwise noted.