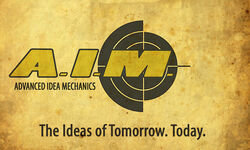 Advanced Idea Mechanics was created as a think tank by Aldrich Killian. Its mandate was scientific research and development, but with limited funding and influence, Killian needed to find sponsors to back his formative venture. On New Year's Eve 1999, at a party in Bern, Switzerland, he approached billionaire industrialist Tony Stark and asked him for support. Tony fobbed off the advance, but his date for the night, the botanist Dr. Maya Hansen, did however accept Killian's contact details. As he was leaving Killian, Stark lied to him and told him he'd meet him on the roof. Killian made the ascent and waited, but Stark never came. That rejection changed Killian and had the effect of reshaping A.I.M. into something quite different to what it had been formed to accomplish.

Over the next decade A.I.M grew from a fledgling think tank into a notable player in technological development. Dr. Maya Hansen, who had also been abandoned by Stark, brought her research with her into the company and started the Extremis program, an experimental process of manipulating organic matter on a genetic level. It was successful as a means to restore a body from crippling injuries, but also had lethal side effects in a number of cases. Treated soldiers who failed to regulate the Extremis virus were prone to spontaneously explode, sometimes publicly, which led Killian to conceive a cover story of terrorist attacks by the Ten Rings group to conceal the truth.

Among the people enhanced by the Extremis virus were Aldrich Killian himself, and a number of soldiers and others with skills useful to Killian's schemes. Some of them were so indebted to Killian and A.I.M. that they participated in his plot, giving him a security force with which to protect his interests. The promise of regrown limbs was also extended to Vice President Rodriguez, whose daughter was missing a lower leg.

Aldrich Killian's schemes to cover up A.I.M.'s mistakes proved to be his own downfall when Tony Stark and Colonel Rhodes worked together to stop him. What became of the company after the loss of its leader remains unknown.[1]

Retrieved from "https://marvel.fandom.com/wiki/Advanced_Idea_Mechanics_(Earth-199999)?oldid=5544044"
Community content is available under CC-BY-SA unless otherwise noted.