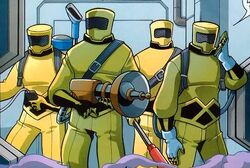 The history of this incarnation of A.I.M. is most likely identical to that of their Earth-616 counterparts.

The villainous organization was approached by Kang the Conqueror in the latters latest scheme to conquer the world in the 21st century. On Kang’s command, A.I.M. hired Taskmaster to break into a facility of Tony Stark and steal the security codes to Stark Enterprises R&D storage facility 17A, where Stark was working on a new prototype Iron Man Armor. With the codes, A.I.M. members broke into this storage facility and stole the armor. Both Power Pack and Iron Man investigated the theft and managed to reclaim the stolen armor, but A.I.M. had already reverse engineered it enough to replicate the technology. With Kang’s help, A.I.M. made an army of the new suits. With this army, Kang attacked New York City and battled both Power Pack and the Avengers. Iron Man figured out a weakness in the suits design, but was incapacitated by Kang before he could use this. Using a Chronal Disruption Field, Kang put all the Avengers into stasis. Power Pack then tried to fight him alone, but found themselves outmatched and was banished 10 years into the future by Kang, sending them into Earth-68326.

Victory was short lived for both Kang and A.I.M. however. Using the chronal energy that Katie had absorbed during their trip to the future and a belt from Kang’s armor that the Future Power Pack from Earth-68326 had managed to secure, Katie was able to return the whole team back in time to the exact moment Kang originally banished them. Using a weapon given to him by future Tony Stark, Jack was able to shut down the armors of all A.I.M. soldiers, depriving Kang of his army.

Equipment: In their first battle with Power Pack, A.I.M. members are seen using weapons specifically designed to combat the teams' powers, like a ray gun that could siphon all of Katie Power's energy, a vacuum to capture Jack Power, a gravity manipulation device to combat Alex Power and a laser that disrupted Julie Power's ability to fly.

Retrieved from "https://marvel.fandom.com/wiki/Advanced_Idea_Mechanics_(Earth-5631)?oldid=5544062"
Community content is available under CC-BY-SA unless otherwise noted.