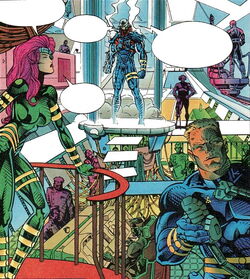 AIM's P.D.C. (Precognitive Data Collection) unit picked up an unknown threat which would totally demolish the organisation in their near future. The Executive Committee had Dr. Necker step up Project: Minion in order to combat that threat. Her first creation was the alcoholic Death Wreck. Her second Minion cyborg killed the mechanoid Death's Head and assimilated his instincts. While Death's Heads personality eventually came to control the Minion cyborg, his original mechanoid body was taken from AIM central by former partner Spratt. The body fell into the hands of Baron Strucker the Fifth, who used it to become Charnel. Charnel was the threat the P.D.C. had picked up, and he not only demolished AIM central but travelled back in time to attempt to erase their past for turning their corporate backs on the Strucker family.[1]

Retrieved from "https://marvel.fandom.com/wiki/Advanced_Idea_Mechanics_(Earth-8410)?oldid=5544080"
Community content is available under CC-BY-SA unless otherwise noted.