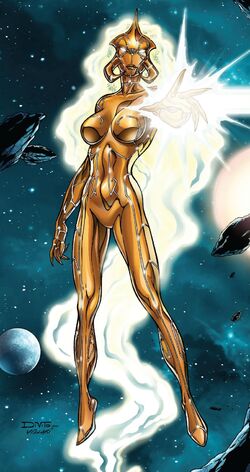 Aegis and Tenebrous were proemial elders corrupted by their cosmic peer, Diableri of Chaos. When the universe was young, Galactus imprisoned them in the Kyln prison facility.[1]

When the events of the Annihilation Wave found the Kyln prison facility compromised, the two proemial elders escaped and encountered Thanos, who convinced them to defeat Galactus along with the Silver Surfer and deliver them to Annihilus for experimentation. After the events of the Annihilation Wave, Aegis and Tenebrous returned to the Kyln, discovering the carcass of Antiphon. Galactus, having escaped from containment, sought to bring a final close to the ambitions of Aegis and Tenebrous. Galactus sent the Silver Surfer ahead to detain them until he would arrive. The Silver Surfer engaged both Aegis and Tenebrous in battle, and managed to channel the energies of the nearby Crunch, the barrier that separates the universe from the Negative Zone, incapacitating the duo.[2]

When entities from the Cancerverse attempted to encroach upon Earth-616, numerous abstract beings, including Aegis, came to the Fault to fight back these forces.[3] During the assault, Aegis was overwhelmed, dying in the blink of an eye, but in her final act, she attempted to transmit what knowledge she could to Nova.[4]

She was stated to have a "Global/Universal" threat level by the Nova Corps.[5] It was revealed that she drew her powers from the 'Crunch', enabling her to gather, channel, and manipulate large quantities of cosmic energy. She also had the physical strength to fight against Galactus and Silver Surfer.

Like this? Let us know!
Retrieved from "https://marvel.fandom.com/wiki/Aegis_(Proemial_God)_(Earth-616)?oldid=6438741"
Community content is available under CC-BY-SA unless otherwise noted.