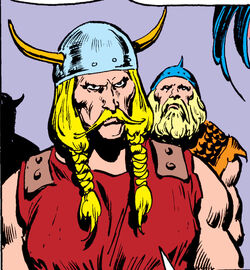 The Aesir were one of the people of Nordheim during the Hyborian Age. Along with the Vanir, they formed the Nordheimr.

They were typified by blue eyes and blond hair.[1]

The Aesir were probably descendants of the people of the pre-Cataclysmic kingdom of Thule,[2] as were the Aesir.[3][4]

2,500 years after the Lesser Cataclysm, the Nordics (Aesir and Vanir) drove all the remaining Hyborian tribes out of all the snow-countries, save for Hyperborea. Their land was known as Nordheim,[5] the Vanir living in Vanaheim, the western part of it.[6]

500 years after the Age of Conan, the north was the theater of constant bickering between the Cimmerians, the Bossonians, the Picts and the Nordheimr.[7]

The main deity of this culture was Ymir.[1]

Retrieved from "https://marvel.fandom.com/wiki/Aesir_(Nordheimr)?oldid=5642523"
Community content is available under CC-BY-SA unless otherwise noted.