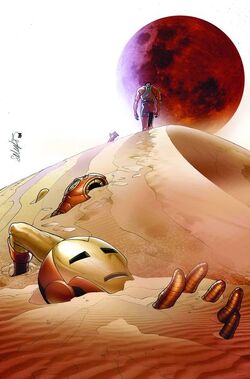 Afghanistan, officially the Islamic Republic of Afghanistan, is a landlocked country located within South Asia and Central Asia. It is bordered by Pakistan in the south and east; Iran in the west; Turkmenistan, Uzbekistan, and Tajikistan in the north. Its capital city is Kabul.[1]

Modern Afghanistan arose from a 1747 alliance of local tribes. The country served as a buffer zone in the area, between British- and Russian-occupied countries.[2]

In 1977, in Herat Afghanistan Romulus sent Daken on mission to attack a village of people.[3]

The communist government was opposed by Mujahideen, local rebels supported by anti-communist states.[2]

During the Russian-Afghan War, in 1986, Logan saved Mordad from the Russians during a battle.[4]

The Hulk leaped across the globe landing in the Nuristan Province. He tried to find food but was attacked by a squad of soviet soldiers, but he smashed them all with ease. When news reached Moscow, they sent their superhuman team, the Soviet Super-Soldiers. He arrived at the Presence base, where he is attacked by the Soviet team. The then decided to work together the stop the Presence.[5]

The US Army came to Doctor Strange for advice as a group of Soviet soldiers in Afghanistan were being effected by magic, their weapons becoming magical sword and their tanks fantastical beasts. This was also happening on other basis around the world.[6]

While investigating a global drugs trade Cloak and Dagger learned that the funds where being used by the Afghan rebels to fund the war against the Soviet Union.[7]

The USSR finally withdrew from the country in 1989.[2]

Cable and his Six Pack discovered a secret base hidden in the Khyber Pass.[8] There they were confronted by Stryfe.[9]

In 1996, the Taliban (a terrorist organization) came to power, and achieved global notoriety for sheltering the Saudi Arabian Osama bin Laden, former ally of the Mujahideen.[2]

On September 11th, 2001, the World Trade Center in New York City was attacked,[10] those attacks having been orchestrated by Osama bin Laden.[2]

In retaliation, the US started the War in Afghanistan. Nick Fury tried to force Captain America on a mission to Afghanistan, he refused and decided to remain and help the relief effort in New York.[10]

During the War in Afghanistan], while overseeing a military demonstration of his technology in an active Afghan war zone,[12] billionaire inventor and industrialist Tony Stark tripped a booby trap that killed his escort and lodged shrapnel in his chest.

The gravely injured Stark was taken captive by the terrorist leader Wong-Chu and ordered to manufacture weaponry for the false promise of receiving medical treatment. Aware of Wong-Chu's lies, Stark and fellow immate Ho Yinsen worked instead on a crude suit of armor, which would eventually help Stark escape captivity, while Yinsen sacrificed himself to buy Stark enough time to put the armor into operation.[13]

After destroying Wong-Chu's base, and still clad in his armor, Stark met James Rhodes, a pilot with the United States Marines who had been shot down by rockets while he was on a reconnaissance mission. After Iron Man helped Rhodes fight off an attack by enemy forces, Rhodes allowed him to drain the helicopter's batteries to recharge his armor. The two continued to make their way back to American forces and stumbled upon a hidden rocket base. Stealing an enemy helicopter, they destroyed the site and flew to the nearest American base.[14]

Afghan-born Mutant Dust returned to her homeland, where she was reunited with her long-missing mother at a refugee camp, and with her wish granted, added to the fact that the Kingmaker may be able to bring Mrs. Qadir to the US, Sooraya thought that there is no price too high.[15]

The Taliban government was overthrown and a democracy installed, but the country remained occupied by NATO peacekeeping forces as the Taliban's presence remained.[16]

The Howling Commandos were sent out to eradicate a terrorist cell in Afghanistan who were purchasing tech from the Lords of the Living Lightning. Afterward, S.H.I.E.L.D. showed up to take the remaining prisoners into custody and clear out the terrorist base. Grogg appeared to pick up the Howling Commandos and brought them back to Area 13.[17]

Wolverine returned to Afghanistan searching for Mystique. He mistakenly killed a woman in a village, whom he thought was Mystique in disguise.[18]

Dust protected the town of Bakwa from a militant group, she took the hand of one of the men. It was there she was recruited by Cyclops.[19]

Terror and Alexis Primo went on a mission to Afghanistan had were forced to take on Aban.[20]

During Norman Osborn's Dark Reign, Tony Stark was forced to go on the run after deleting the database containing the secret identities of several superheroes to prevent it from falling into Osborn's hands.[21] Stark made his way across the globe to each of his hidden armories, being the final one in Wong-Chu's former base.[22] When he arrived to Afghan airspace, Stark was shot down by two guerillas, forcing him to continue by foot.[23]

Stark made his way to the abandoned base, Stark and unveiled a copy of his Iron Man Armor Model 1 dubbed the "Mark 0," which he subsequently put into into operation. After confronting and scaring off the two guerillas that had shot him down who had followed him the base, Stark donned the Armor and flew off to Dubai.[22]

Stationed at the Camp Leatherneck, in Helmand Province, Gauntlet was asked by fellow soldiers why he refused to join the Avengers, as those soldiers were admiring of Captain America, Thor or Iron Man's returns. He answered critically that the real heroes never left.[24]

During the War of the Serpent, Army Ranger Marcus Johnson and his best friend Cheese were stationed in Afghanistan. At this time, the Serpent's forces began spreading fear worldwide. In an already volatile area, this resulted in a massive battle that killed twenty-five soldiers and injured forty-eight others, though Johnson and Cheese largely escaped unscathed.[25]

A secure C.I.A. compound was located in Kabul.[26]

When Tony Stark traveled to Kabul, Afghanistan in May of 2009 to introduce his new cluster missile design, an extremely destructive, multi-warhead weapon called the "Jericho", to the United States Air Force, his convoy was attacked by militant accomplices of terrorist-leader Raza and he was knocked unconscious. He woke up to find that he had been severely injured by shrapnel piercing his chest, and had been captured by the militants, yet had survived thanks to his fellow captive, Dr. Ho Yinsen. Yinsen had made a high powered electromagnet to hold the shrapnel in place, preventing it from puncturing his heart and thus keeping him alive. Stark was ordered by their captors, a terrorist group calling themselves the Ten Rings, to build them a new version of the Stark Industries' Jericho missile. He grudgingly agreed, but instead used the time to build a powered suit of armor along with a miniature Arc Reactor to keep him alive.During his escape, Yinsen was killed in an attempt to stall the guards long enough to buy Stark enough time to charge the suit. After the suit was powered up he broke out and destroyed all stock they had of Stark weapons, and used a rocket booster to get clear of the scene. After crashing into the sand he abandoned his armor, and traveled for some time before U.S. military helicopters found him and carried him to safety.[30][31][32][33]}

Gregory Stark assembled the Avengers to hunt down the rogue Captain America, and kill Cap's son, The Red Skull. One mission was to Afghanistan.[34]

Tony Stark was captured in Afghanistan and forced to create weaponry alongisde fellow prisoner Ho Yinsen. When Yinsen was about to operate on Tony Stark to put an electromagnet in his chest to save him from the shrapnel approaching his heart, Stark refused salvation and, against Ho's will, activated a weapons-free "Rescue suit" for Yinsen to escape captivity. In his final words, Stark requested Yinsen to use the suit to rescue the world from people like him.[35]

The US Army helped various superheroes on missions in Afghanistan.[36]

James Newman was a corporal with the United States Marine Corps and is stationed in Afghanistan. He is in the Corps because of "zealots crazy enough to believe that hate is the same thing as believing in God." He hopes that by making Afghanistan safe, he can "make America safe". During a recent skirmish in an Afghan village, he believes that Captain America showed up to assist him at a time when he will was at a breaking point. After saving two troops and surviving the attack, his fellow Marines tell him they only saw Newman performing the heroic deeds, leading Newman to question his sanity....[37]

Deadpool along with the X team, composed by Bullseye, Domino, Silver Sable and himself, Deadpool was commissioned by the US government in 1983 and conducted clandestine missions.[38]

Like this? Let us know!
Retrieved from "https://marvel.fandom.com/wiki/Afghanistan?oldid=6506927"
Community content is available under CC-BY-SA unless otherwise noted.