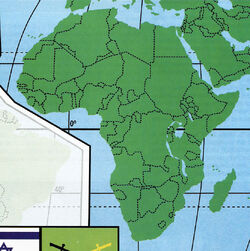 Odin teamed up with Agamotto, Black Panther, Ghost Rider, Iron Fist, Phoenix and Starbrand at least a million years ago during the Stone Age. They battled the out-of-control Celestial called the Fallen. The fight with the Fallen cost the Ghost Rider his mammoth, but in the end, the Fallen was defeated and imprisoned in an underground chamber in what would become the modern-day country of South Africa.[3]

By 100,000 BC modern humans lived by hunting and gathering with stone tools. From Africa they spread to Europe and Asia.[citation needed]

In 3200, B.C. one of the earliest and greatest civilizations in human history was settled in Africa. Five thousand years ago the chain of independent city-states lining the river Nile united to form one long, thin country ruled by the "Pharaoh". For almost 30 centuries Egypt remained the foremost nation in the Mediterranean world. Then, in 332 B.C., the arrival of Alexander the Great heralded the end of the Egyptian way of life.[4]

In 32 A.D., Caligula became Emperor of Rome. He sent troops to conquer the deepest region of Africa,[5] Wakanda, but the Black Panther and the Wakandans would beat them back using deadly force each time.[6] Flavius Scollio was sent by his commander to investigate an anomalous phenomena, which he discovered was a crashed alien spacecraft. The craft was inhabited by a single alien, which Flavius killed. He then donned the armor which imbued him with power to mentally manipulate his surroundings and advanced longevity. Using the armor, Flavius created the Black Tower of M'Kumbe in Wakanda, which housed a kingdom modeled after ancient Rome inside, where he resided for centuries.[5]

During the later half of the 20th Century, a number of jungle adventurers surfaced in Africa, defending various unspecified regions which they habitually resided. Jungle adventurers during the early 1940s included Trojak,[7] an American who was raised in the jungles, the similarly raised Zara of the Jungle[8] and the mysterious Tigerman.[9]

Trojak often came to the rescue of explorer Edith Alton.[7] Following the outbreak of World War II, Nazis began setting up a camp near Trojak's domain and the hero vowed to drive them out.[10] With the aid of Edith's brother Jerry (a spy for the British) he forced the Nazis out of the region.[11] Jerry was injured during the conflict necessitating Trojak to battle the Gemba tribe in order to obtain the Devil-Flower, a medicinal plant that could save Jerry's life that the Gemba also worshipped as a god.[12] In Zara's region was a colony of an unspecified European state, and early on in her career she befriended the local commissioner Captain Jeff Graves.[8] The pair prevented a tribal war instigated by Bwana Gambo[8] and broke up a slavery ring.[13] Also during this period, Dakor the Mystic rescued Anan Twisdon from the Balus tribe[13] and Tigerman rescued Professor and Louise Carson from the deadly Monolink tribe, defeating their leader King Kuu.[9]

In 1941, when Dr. Emil Frank was framed for murder in the United States, he and his son Robert fled to Africa. There, Robert succumbed to a jungle illness. In order to save his son's life, the irrational Dr. Frank gave Robert a blood transfusion with blood from a Mongoose that was dying of snakes venom. The insane experiment worked, and Robot was revived and was also endowed with super-human speed. Emil died from the strain of trying to save the life of his son. Robert then returned to the United States and as the Whizzer cleared his fathers name.[14] Also during this time, the Zambiji tribe had captured a pair of American explorers and attempted to sacrifice them to Kai-Mak their shark god. The explorers were rescued by the Vision who slew Kai-Mak in battle.[15]

In 1942, an island populated with gold was discovered by Nazi forces led by Marshal Doering who attempted to secure the gold for the Nazi war effort. This plan was thwarted by the Sub-Mariner.[16] Later that year, the region was once more defended by the Sub-Mariner who ousted Nazi commanders Von Ratter and Erwin Rommel.[17] On March 25, 1943, American soldiers Combat Casey and Penny Pennington were in the area clashing with Nazi forces.[18] Likewise on April 7 if that year American soldiers Combat Kelly and Cookie Novak were in Africa where they clashed with Rommel.[19] They were also in the region on November 8, 1943, where they clashed with Nazi forces as part of Operation: Torch.[20] By 1943, the Nazis had sent their operative the Mongoose Master to the region to undermine the Allied efforts there. He targeted members of the American Women's Auxiliary Army Corpse stationed in the country. This led to WAAC member Betsy Ross to enlist the aid of her long time friend Captain America to stop the Mongoose.[21] In 1948, the Human Torch and Toro traveled to the Manuguay region where they stopped ivory poacher Prestor Jim.[22]

In 1954, the criminal known as the Hypnotist gathered the evil Leopard Men as part of his criminal empire that sought overthrow the worlds governments. His plots were foiled by the Human Torch and Toro.[23] Also around this time the jungle adventurer Cliff Mason explored Kuba Island.[24] Secret Service agent Rick Davis was also active in Africa in 1955, preventing Communist subversion of the local tribes at the time.[25]

Since Africa is the richest of all continents in diamonds, the Living Laser was ordered by the Mandarin to invade the continent with the help of Ultimo, but they were ultimately defeated by Hawkeye and Thor.[26]
The Red Ghost came to a secret S.H.I.E.L.D. facility to enhance the Cosmic Ray Intensifier and build an ape army. Confronted by Iron Man and the Unicorn, he was mentally stopped by Beta, who ordered Alpha to destroy the Intensifier, and then the apes returned to the jungle. The Red Ghost was eventually abducted by the Unicorn, leaving Iron Man behind to repair his armor and return to the United States of America.[27]

Like this? Let us know!
Retrieved from "https://marvel.fandom.com/wiki/Africa?oldid=6444527"
Community content is available under CC-BY-SA unless otherwise noted.