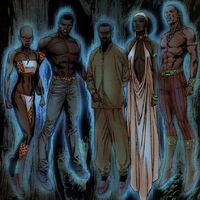 Base of Operations
Africa
Affiliations

The team consisted of a group of African superhumans who came to be after being infected by the retrovirus brought by Hyperion when he came to Earth.

The team was first encountered when the Squadron Supreme was present in Uganda, Africa to neutralize an African general named John M'Butu, whose voice can compel obedience. The general, however, is actually executed by members of the Protectors group who told the Squadron to leave, stating that "Africa is now off-limits" and under their protection and authority under threat of violence if the Squadron returned.[1]

They were next seen when the vigilante Nighthawk had forcibly manipulated Hyperion into attempting to overturn the Sudanese government after witnessing the wanton slaughter and death committed by its leaders and attacked both Hyperion and Nighthawk in response. They later admitted to being ineffectual in solving Africa's problems and were impotent in attempts to improve all of Africa despite their power and decided to leave while ordering the two to never return to Africa.[2]

It is unknown if they managed to retain their powers after the a mass-depowering wave removed the powers of anyone affected by Hyperion's presence on Earth. Though it was shown that some retained their abilities.[3]

The team was presumably killed along with the Squadron Supreme when Earth-616's Cabal destroyed their Earth during the incursion, so theirs could live.[4]

Retrieved from "https://marvel.fandom.com/wiki/Africa%27s_Protectors_(Earth-31916)?oldid=3688519"
Community content is available under CC-BY-SA unless otherwise noted.