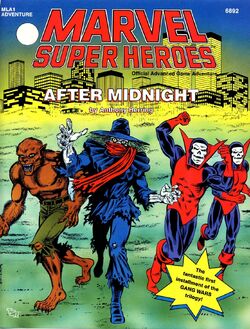 Metropolitan Museum of Art curator Maximilian Pride asks the superheroes to help him find a grimorium that, per the security cameras, was stolen by superpowered beings. Pride's assistant Felicia Bifrost is suspicious of her own brother Johnny, of the street gang Flashing Blades; she is wrong, but the heroes follow that clue. They discover that several youthful street gangs are being raided by superpowered, monster-like criminals like the Werewolf - but whenever the heroes defeat one of these monsters, the villain simply vanishes. Rumor is that the local Maggia family, headed by Hammerhead, may be trying to expand their activities and remove the gangs -but this is false, as the heroes discover when one of them impersonates Hammerhead's poker game contact: Hammerhead is angry because some strangers are trying to force their way into his turf, and he feels compelled to hire some high-tech mercenaries (not monster-themed ones) for extra muscle. The monsters are mind-controlled stooges of a newly-created gang called Faces of Fear, ostensibly led by Mister Fear. Fear himself is a figurehead, puppetteered by the so-called "Big Boss" - The Fixer and Mentallo share this rank, that to their hypnoporter machine. The Faces of Fear are trying to manipulate the events, convincing the street gangs of Maggia being behind the monster attacks. They intend to cause a gang war that would remove Maggia from New York City, allowing the Faces to take over organized crime in the area. Although the heroes discover pieces of the puzzle, they are always one step behind the villains. During their quest, they are framed and harassed by the authorities; they stumble into a Project Wideawake secret base and confront the Sentinels; they face the ghost of the evil wizard who had written the missing book; they track a missing Wakanda jewel that the Black Panther may believe they have stolen; and they have a chance to help some Morlocks against the Marauders during the so-called Mutant Massacre. They also discover that both Felicia and Johnny Bifrost are superpowered mutants. The heroes eventually prevent an open conflict in the streets of New York and stop Mister Fear and his monstruous minions; but cannot find the real Big Boss or his (their) wonderful machine.

An adventure for the Marvel Super Heroes Role-Playing Game.

Like this? Let us know!
Retrieved from "https://marvel.fandom.com/wiki/After_Midnight?oldid=6478016"
Community content is available under CC-BY-SA unless otherwise noted.