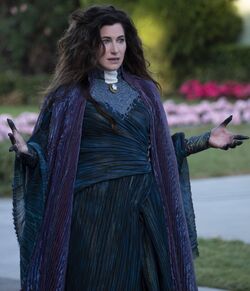 Agatha Harkness was a powerful sorceress of the Salem coven of witches, who her mother Evanora was the leader of. In 1693, the coven put her on trial for practicing dark magic and magic that was above her rank. While initially pleading remorseful and innocent, Agatha quickly used her dark magic against her coven when her mother said that there was no hope that she'd change for the better. She drained the magic power and life energy from her coven, even her mother, then fled Salem.[2]

At some point, Agatha gained possession of the Darkhold, the "Book of the Damned," which she studied rigorously.[1]

In 2023, Agatha sensed a concentration of magical power being performed in Westview, New Jersey. She went to investigate and discovered that the whole town had been put under a multitude of spells all active and interacting with each other at once. She discovered that the source of all this magic was Avenger Wanda Maximoff, who wasn't even a witch, which piqued Agatha's interest.[2]

With Wanda having transformed Westview into a sitcom reality, Agatha gave herself the role of "Agnes the Nosy Neighbor" in order to investigate.[3] She got close to Wanda by helping her with what was supposed to be her anniversary dinner with her husband Vision.[4] She later helped Wanda integrate herself better into town by introducing her to the other women in town.[5]

Agatha released "Herb" from Wanda's spell in order to make Vision suspicious of Westview's reality.[6] She later intentionally broke character herself in front of Vision in order for him to question further, which would drive a rift between him and Wanda. Meanwhile, Agatha discovered that Wanda had the ability to spontaneously create life within her reality, as she had given birth to twins, who had rapidly aged up to 10 years old. One of the twins, Tommy, even suggested that Wanda could bring back the dead. Hearing this, Agatha decided to emotionally manipulate Wanda further by mind-controlling Ralph Bohner into pretending to be Wanda's dead brother Pietro.[7]

While Wanda was busy getting to know the fake Pietro, Agatha manipulated the suspicious Vision into exiting the barrier of Westview. Vision nearly dematerialized upon exiting Westview, which caused Wanda to rapidly expand the borders of her reality.[8] Drained from dispensing so much energy, Wanda asked Agatha to babysit her twins the next day. Agatha used this opportunity to lure the weakened Wanda into a rune trap within her basement and finally reveal to her who she really was.[3]

Agatha was baffled that Wanda could be such a powerful witch without knowing any of the fundamental spells. She wanted to discover the source behind Wanda's power, so she took a trip with Wanda through her memories. Agatha discovered that Wanda already could cast probability spells at a young age, without being remotely aware. Going through Wanda's past, Agatha came to the conclusion that Wanda was a powerful wielder of chaos magic, which could only mean that she was the legendary Scarlet Witch,[2] a powerful witch mentioned in the Darkhold to have no need of a coven or basic knowledge of witchcraft.

She attempted to drain Wanda of her power, but Wanda used Agatha's own rune spell against her. Wanda decided that Agatha was too knowledgeable in magic to be eliminated, so she decided to lock Agatha within her role of "Agnes the Nosy Neighbor" until Wanda would have use for her again.[1]

Like this? Let us know!
Retrieved from "https://marvel.fandom.com/wiki/Agatha_Harkness_(Earth-199999)?oldid=6286308"
Community content is available under CC-BY-SA unless otherwise noted.