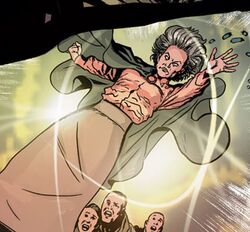 Agatha Harkness was a survivor of her domain that was reconstructed into the paradise called Salvation by three of Ultron's former pawns: the Human Torch, Vision, and Wonder Man. During her time in Salvation, Agatha became romantically involved with the Vision.

Agatha was in charge of Salvation's arboretum where she usually used her magical gifts to create different strains of trees and flowers for the benefit of the refuge. She spent alot of days walking with Vision teaching him about different things like the concept of humor.

The three founder's recruited a version of Hank Pym that was exiled to the Deadlands and brought him back to their refuge in hopes that Pym might help them find a way to stop Ultron permanently. But after months of research, Pym figured a way to keep Salvation safe however, to accomplish their goal, the three leaders of city would have to sacrifice themselves. Pym's plan was to use the refuge's force-field to absorb the Ultron Engine's hive consciousness, but he needed a greater mind to control them, the mind of the three founders combined.[1]

Agatha was confronted by Vision who came to say goodbye to her. As they embraced each other for the last time, Vision thought the idea of his sacrifice would be bring sadness to Agatha's face. She told him to not let the facade make him think otherwise she was heartbroken but she knew that this time would come. Do to her age she thought she would be the one to go as the Vision could never grow old but since he would make this sacrifice that in itself would be a tragedy.

During the invasion, Agatha used her powers to fight against the legions of zombie/robot hybrids while everyone else prepped for the reactivation of the shield. Agatha then looked on as she saw Vision fly to the convergence point, becoming the boss consciousness for Salvation's shield that was now composed of the ever-vigilant Ultron Engine army, with the exception of Lord Ultron and the zombie leader Magneto, and life began anew for those still living.[2]

Seemingly those of the Agatha Harkness of Earth-616.

Seemingly those of the Agatha Harkness of Earth-616.

Like this? Let us know!
Retrieved from "https://marvel.fandom.com/wiki/Agatha_Harkness_(Earth-93787)?oldid=5667282"
Community content is available under CC-BY-SA unless otherwise noted.