Months after his return,[1] the artificial intelligence known as Ultron decided to accomplish his goal of destroying humankind by launching a massive and abrupt attack on Earth,[2] taking over the whole planet, killing billions of innocents and dozens of heroes and villains who stood in his way. Only a few of them are still alive, in a secret refuge under Central Park, ready to reclaim freedom or die trying.

Locating where Spider-Man was being held hostage by the Owl and Hammerhead, Hawkeye attempts to rescue him. Upon Hawkeye's location of Spider-Man, Ultron located their position and launched a full assault in an effort to kill the two heroes. Hawkeye destroyed the Ultron Sentinels as the two made their way to an underground area beneath Central Park, where a group of survivors including Iron Man, Emma Frost, She-Hulk, Luke Cage, Invisible Woman and Wolverine have taken refuge. Defending his one-man mission, Hawkeye responded that at least he did not give up on the world. Iron Man responded that they had not, as he shows Hawkeye a saddened Captain America sitting by his broken shield.[3]

Sneaking around on the streets of a decimated San Francisco, a partially disfigured Black Widow met with Moon Knight in one of Nick Fury's old bases. Back in New York, Spider-Man recalled how he simply woke up and found the world under attack. As the heroes pondered why Ultron would take over the world just to make deals with low-level criminals like the Owl and Hammerhead, Captain America informed the other heroes that he now had a plan.[2]

He stated that if superheroes could be offered to Ultron as Spider-Man was, they could offer up one of their own, sending someone who could damage the inside of Ultron's fortress. Luke Cage and She-Hulk volunteered. Luke agreed to deliver She-Hulk to Ultron's forces. Meanwhile in Chicago, Black Panther, Red Hulk, and Taskmaster watched a group of Ultron Sentinels. Red Hulk decapitated one of them, giving the head to his allies. Back in New York, a group of Ultron Sentinels met with Luke Cage and She-Hulk and guided them to the fortress to make the deal. Luke Cage was shocked when he discovered that they were to negotiate with the Vision instead of Ultron.[4]

The Vision revealed to Luke Cage and She-Hulk that Ultron was using him as a conduit and that he was punishing humankind from the future. After learning this, She-Hulk forced Cage out of Ultron's lair and was killed by Ultron's sentinels while protecting him. Cage survived a nuclear explosion from Ultron's Sentinels while the superhero resistance fled from Manhattan. In the San Francisco base they had discovered, Black Widow and Moon Knight find Fury's fail-safe plans for different apocalyptic scenarios, including one involving Ultron taking over the Earth. In Chicago, Red Hulk catches up to Taskmaster, who had in his possession the head of one of the Ultron Sentinels. Red Hulk declared that he could no longer trust Taskmaster and killed him. Eight days later, the heroes who had survived capture in New York arrived in the Savage Land, where they met Ka-Zar, who led them to a refuge area. The heroes arrived as Luke Cage died from radiation poisoning after telling them what he had learned. Red Hulk, Moon Knight, and Black Widow arrived and revealed a plan made by Nick Fury to defeat Ultron.[5]

As Ultron's forces laid waste to Austin, Texas, the heroes in the Savage Land found a hidden bunker. They met Nick Fury, who related his plan to use Doctor Doom's Time Platform to go into the future with a strike force to defeat Ultron before he could attack the present. Tony Stark pointed out that Ultron would know they were coming and would be ready for them. Wolverine suggested to use the platform to go back in time to kill Hank Pym before he created Ultron, but most of the others disagreed with this idea. Valkryie suggested going back to tell Pym to not build Ultron, but Wolverine pointed out that would just dare Pym to do it anyway. Iron Man, Captain America, Nick Fury, Red Hulk, Storm, Quake and Quicksilver used the platform to go into the future. After they left, Wolverine announced his intention to carry out his plan to travel into the past and kill Hank Pym so that Ultron's creation never comes to pass.[6]

While the heroes traveled to the future, Wolverine arrived in the past, only to be surprised to learn that Invisible Woman had followed him. Despite her reluctance to go along with his plan, she accompanies him when he stole a S.H.I.E.L.D. hovercar from a younger Nick Fury to travel to New York. As the heroes in the future were overwhelmed by an army of Ultron Sentinels, Wolverine and Invisible Woman find Hank Pym analyzing Dragon Man. Despite Invisible Woman's attempts to find another way and Wolverine's acknowledgement of the good Pym had done, they finally accept that Wolverine must kill Pym. This led to a fight between Wolverine and Hank Pym which ended with Pym's death.[7]

Wolverine and the Invisible Woman return to the future only to find the Savage Land covered by wreckage of crashed ships. Sue recognized them as being Kree and theorized that in this new timeline, the Kree-Skrull War reached Earth. They saw men in armor, who called themselves the Starkguard, checking the area out. The two then go to New York City, with multiple S.H.I.E.L.D. Helicarriers around. Their flying car was shot down as they found themselves attacked by the Defenders - consisting of a one-eyed Captain America, Doctor Strange, Hulk, Wolverine, Thing, a one-eyed Cyclops, Wasp in Captain Marvel's costume, and Star-Lord. The Thing was surprised to see Susan "back", but the rest of the group believed the two were Skrulls. A fight broke out with the two Wolverines going at it hard, with the time-traveling Wolverine putting his double down and saying they did what they had to do to make a better world. The Defenders realized they were not Skrulls and reluctantly realized they have to talk to "him." At that moment, a half-cyborg Tony Stark flew in with a platoon of armored robots demanding to know what was going on.[8]

After capturing the time-travelers, Iron Man ran a psychic scan on Wolverine and the Invisible Woman, stunned to see their reality alongside Professor X and Emma Frost. They told Iron Man those memories were real but Stark believed Morgan Le Fay had planted them as spies. Iron Man met the time-traveler Wolverine and explained that his injuries were due to a war between Latveria and Asgard, in which Thor vanished and Morgana conquered half the world. Wolverine was shown the footage of Hank Pym's death while Iron Man recounted that the Avengers broke up afterwards and magic overcame technology and "you broke the world." At the Helicarrier, the Defenders' Wolverine decided to talk to his other self and the others helped him push past Emma Frost with the Thing wanting to help the Invisible Woman. Iron Man chastised Wolverine on simply killing Hank Pym, saying he could have gotten Pym to use a virus to stop Ultron instead. The Invisible Woman broke free, causing Iron Man to believe this was all another of Morgan le Fey's tricks. At that moment, Morgan le Fey attacked with a swarm of magically-powered Doombots. The Defenders fought them with Iron Man controlling hundreds of drones and accusing le Fey of responsibility for the time-travelers. She claimed innocence and pointed out to Iron Man that a pair of Helicarriers were crashing into the heart of New York City.[9]

The explosion killed most of the heroes present as Wolverine, thanks to his healing factor, pulled himself out from the wreckage. A dying Tony Stark told him he couldn't simply go back and try to change the future again, that time was a living organism that would break if ripped too much. In the past, the previous Wolverine was about to kill Hank Pym when the newer Wolverine (clad in his classic costume) came to stop him. After using an incident from their past to convince his double of who he was, the newer Wolverine warned that killing Hank Pym would just make things worse. Hank Pym claimed he would not build Ultron, but Wolverine said he had to in order to allow history to continue. Pym said he could try to build a better A.I., but with a shut-off switch if he needed it. The Invisible Woman arrived to tell him he had to forget all this too, with Pym confused as to how that happened. The Invisible Woman and the two Wolverines returned to the Savage Land. The two Wolverines entered a cave. The newer Wolverine told his double that he did not want to live with the memories of the world he saw. The past Wolverine killed his double and returned to a stunned Invisible Woman. Back at his laboratory, Hank Pym was putting together the first version of Ultron, who called him "Daddy."[10]

Months before Ultron's attack, Hank Pym was working in his lab when a package was delivered to him by a hidden Invisible Woman. He watched a video of his younger self which supplied a pack of equations on how to stop Ultron. The Avengers attacked the headquarters of the Intelligencia to rescue Spider-Woman, the event that led to Ultron's revival. When Ultron was revived, Pym contacted Iron Man to supply him with the equations he was given in order to upload them into Ultron. Ultron was jarred to realize he was being defeated despite holding off the Avengers. The code was fully uploaded to shut him down and the virus destroyed him. Wolverine and the Invisible Woman returned to the present, happy to see New York City back to normal. Before they can celebrate, a massive shockwave echoes through time and space as reality seemingly shattered before they were pulled back together. At Avengers Tower, Hank Pym, Iron Man, and Beast theorized that Wolverine's time travel journeys caused too much stress to the space-time continuum and had created many tears across the fabric of the Multiverse. In the Ultimate Marvel universe, Miles Morales was out as Spider-Man when a flash of light echoed only to reveal the coming of Galactus. Hank Pym talked to himself on what went wrong and suddenly realized what he had to do. High above Earth, Angela appears, vowing revenge on whoever had pulled her from her world.[11]

Hank Pym reviewed the data that Wolverine had brought back and was starting to slip into insanity. Fresh off the disaster he just saw, Pym sat in his lab for four days straight. Not one but two apocalyptic timelines were shown in Wolverine's data and neither would have happened if he had acted differently. He was considering suicide. However, a sudden thought occured: the other timeline was worse because it lacked a Hank Pym. Not just Hank Pym, the scientist workaholic, but Hank Pym, the ant-commanding, size-changing, second-guessing, science-adventurer. Hank Pym had a positive effect on the world, and could have again. Hank Pym was going to save lives by doing what he did best... heroics and science with a strong theatrical flair.[12] 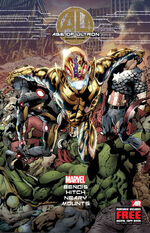 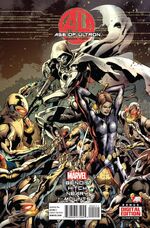 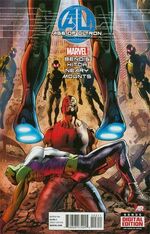 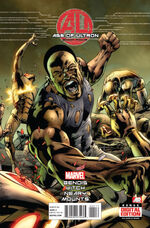 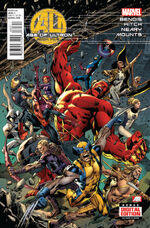 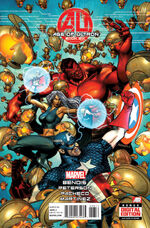 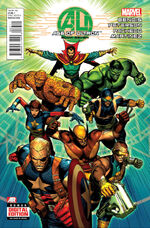 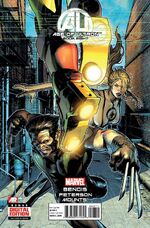 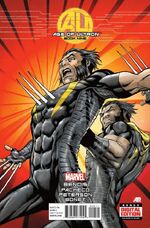 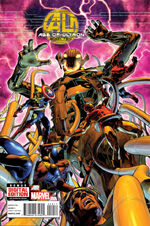 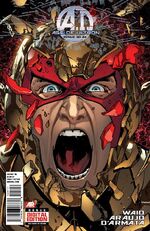 Retrieved from "https://marvel.fandom.com/wiki/Age_of_Ultron_(Event)?oldid=6469613"
Community content is available under CC-BY-SA unless otherwise noted.