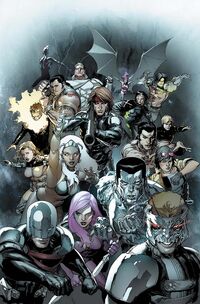 With the proliferation of mutant births, anti-mutant sentiment grew. And without anyone to peacefully unite the mutants or create a poster organization for mutant superheroes, mutants were only seen as a liability and danger.

Anti-mutant protests and rallies began springing up all over the United States, and often turned violent. During the March of Purity on Washington, D.C., mutants right advocate Dr. Henry McCoy was savagely beaten to death by anti-mutant protesters.[1]

After the Albany incident put a face on "the mutant threat" and paved the way for anti-mutant legislation, the U.S. government sanctioned the creation of the mutant hunting robots, the Exonims.[3]

Exonims went into mass production and began running operations (such as Clean-Sweep, Iron Pig and Red Hot) to round up mutants and human relatives of mutants. Mutants were arrested or killed on sight. In the months that followed, the mutant population dropped drastically. The culling of the mutant population became known as "The Decimation".[4]

With mutants being executed by the thousands in places like Alcatraz[3] and by Exonims in the streets, human families of mutants were next to be targeted. X-Gene carriers were offered the option of sterilization or imprisonment. Researchers were even commissioned to develop a "cure" for mutancy.[3]

Around the world mutants did not fair any better. The United Kingdom attempted to exile their mutant population to a small island off the coast of Ireland. However, the ships never made it to their destination. Instead it was liberated by mutant extremists and most of the mutants escaped into Canada and the United States.

Those aiding or protecting mutants were targeted as well. The popular superhero team, The Fantastic Four, was publicly arrested for harboring a mutant fugitive. Sue Storm herself reported the incident after the mutant injured her son Franklin.[5]

In a show of force and to rally his fellow mutants, Magneto used his control over magnetism to literally steal multiple skyscrapers (including the Chrysler Building) from Manhattan and create a mutant safe haven, Fortress X.[3] Now Magneto maintains his stronghold and invites mutants to join him in the last stand of mutantkind.

Following these numerous terrorist acts by Magneto and his followers, the U.S. government assembled an elite team of human heroes to hunt down these last mutants .[5]

The Age of X had many after effects on the mainstream universe:

Retrieved from "https://marvel.fandom.com/wiki/Age_of_X?oldid=5290028"
Community content is available under CC-BY-SA unless otherwise noted.