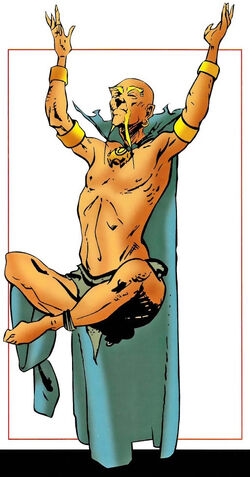 It was believed that some time shortly after the dawn of humanity, Genghis was given great power by the Vishanti. In return for this power, Genghis agreed to summon together the greatest mystics in the world for a tournament to discover the Sorcerer Supreme. It could not be proved he received his power in this way, as no one had memory of that time and Genghis himself had long since lost his mind. His mind cleared for one day every century to allow him to preside over a new contest. It is in this way that Doctor Strange became the Sorcerer Supreme.[citation needed]

As well as being mentally fragile, Genghis was physically frail. Genghis levitated nearly all the time, as he was no longer able to walk any distance. Aside from his centennial duties, Genghis was of little use and was often a danger. Nevertheless he was long cared for as a guest of Strange's Sanctum Sanctorum.[citation needed]

Strange sought assistance from Genghis on numerous occasions but seldom was he of any help. By gifting Strange with an ancient scroll purporting to contain a means to reach Eternity, Strange was instead stranded in the Netherworld of Eternal Doom.[3] Later, Strange sought out the help of the Aged Genghis against Dormammu and Baron Mordo.[4]

The Aged Genghis possesses great magical skill, although in his normal state he has little or no control of his powers.

Like this? Let us know!
Retrieved from "https://marvel.fandom.com/wiki/Aged_Genghis_(Earth-616)?oldid=6463026"
Community content is available under CC-BY-SA unless otherwise noted.