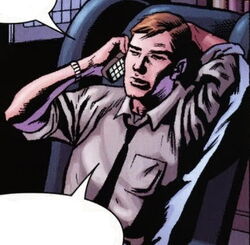 Agent Baker was a Skrull spy sent to Earth and infiltrated the FBI as a precursor to a larger Skrull invasion of Earth that was still years away in the making. The details of this infiltration are unexplained at this time. When he first surfaced, he was already under deep cover as the FBI's "Agent Baker". The Skrull's cover was so deep.[1]

He earned a reputation within the FBI as being resident expert on unexplained phenomenon and was the only man within the Bureau who investigated such cases. When he later gave a lecture on the benefits of mutants in society, he attracted the attention of leading expect Charles Xavier, secretly the leader of the mutant group known as the X-Men. Meeting with Xavier, Agent Baker revealed that he knew that Xavier was secretly a telepath. Despite the fact that Xavier had trouble reading Baker's mind, he took the FBI agent into confidence regarding his secret, his connection with the X-Men, and their operations. For a brief period, Agent Baker supplanted Agent Fred Duncan who had been FBI liaison to Xavier for years.

Baker later put the X-Men in touch with inventor Able Stack, who was allowed to have his prototype robot X-50 brought along on a test run with the X-Men on a mission. Baker supplied the mission which included a battle against the Subterraneans known as the Lava Men. X-50 was destroyed in the ensuing battle but the X-Men escaped unscathed. The mission left the young X-Men to wonder just who Agent Baker was and if he was truly an ally.[2]

Much later, Agent Baker had Xavier send some of his students to investigate various claims of alien activity on Earth. When these leads did not pan out, Baker thanked the X-Men for his work. Agent Duncan soon returned to his regular roles as the X-Men's liaison, Agent Baker continuing his own singular work again, still unaware that he was secretly a Skrull sleeper agent.[1]

The fate of "Agent Baker" is unknown, but in recent times the Skrulls finally launched their Secret Invasion of Earth. [3] However it ended in failure and the invaders were either forced to flee, killed, or incarcerated.[4]

A typical member of the Skrull race, "Agent Baker" could shapeshift. As part of the Secret Invasion, "Baker" was engineered to appear to be human, able to fool any most means of detecting his true nature be it mental, physical, magical, or using any kind of technology.

Like this? Let us know!
Retrieved from "https://marvel.fandom.com/wiki/Agent_Baker_(Skrull)_(Earth-616)?oldid=4429691"
Community content is available under CC-BY-SA unless otherwise noted.