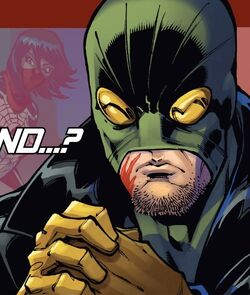 Hydra tasked Agent Cole with creating a time travelling armor known as Project Backtrack. During its construction, part of the suit's power source scared his face. Completing Project Backtrack after about ten years, it was stolen by Ines Harper. He was confronted by a past variant of himself who explained who took the suit and who helped her. As his counterpart disappeared from existence, Cole vowed revenge on the helper known as Silk.[1]

Like this? Let us know!
Retrieved from "https://marvel.fandom.com/wiki/Agent_Cole_(Earth-616)?oldid=5213745"
Community content is available under CC-BY-SA unless otherwise noted.