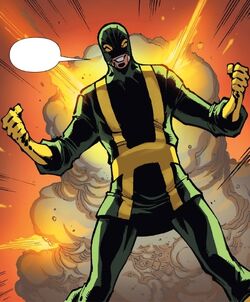 Hydra tasked me with the impossible. To find a way to bend space and time. I worked for years on Project Backtrack. It's my life's work. Research. Development. Countless tests. All of them fruitless. So imagine my surprise in finding my own invention. Up and running. Back from the future somehow.

Hydra tasked Agent Cole with creating a time travelling armor known as Project Backtrack. During its construction, Hydra's scanners found that a future variant of the suit had arrived in their time. Rushing to Forest Hills, Cole and a squad of fellow Hydra agents confronted the time- displaced Chronosaurus Rex, Silk, and Spider-Man.

During the subsequent battle, the three were able to escape from Hydra. Hunting them down, Hydra captured Agent James Harper, whom they deduced was Rex, as the time-travelers arrived at his home.

Later that day, Hydra's base in Red Hook was invaded by the time travelers and Ben Parker. Cole was able to short circuit Project Backtrack and force its user out. To his surprise, it wasn't future James, but rather a ten year old girl. He was going to have her tortured until noticing her resemblance to James. He placed a new battery into the Backtrack Suit and planned to travel to the future only to be stopped by James and Silk. He escaped Red Hook by taking a Hydra jetpack and flying away.

Cole followed the heroes until the time travelers when back to the future. He accompanied and, upon arriving in the future, rushed to Red Hook. He told future Cole his story before being erased from existence.[1]

Like this? Let us know!
Retrieved from "https://marvel.fandom.com/wiki/Agent_Cole_(Earth-TRN567)?oldid=5992639"
Community content is available under CC-BY-SA unless otherwise noted.