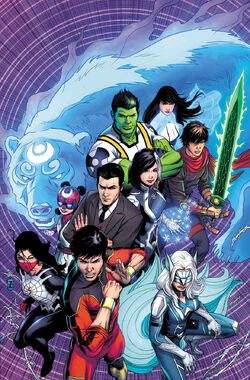 Base of Operations
Temple of Atlas, located within a huge concealed cavern beneath San Francisco, California
Affiliations

One of the most inscrutable, pervasive and enduring secret societies on Earth, the Atlas Foundation traditionally pursued world domination but currently uses its covert power and influence for humanity's greater good.

Steeped in advanced science and ancient sorcery, the society regards itself as a perpetuation of the ancient Mongol Empire, with each leader a descendant of and rightful successor to Genghis Khan. As he grows old, each Khan seeks a successor. For most of the 19th Century, the Atlas Foundation society was led by Master Plan. Plan had long since selected his potential successor, Jimmy Woo, despite the attempts of Jimmy's parents to spare him this legacy and their flight to America. Jimmy Woo became one of the top West Coast FBI agents, but Plan Chu made himself into Woo's greatest enemy, the Yellow Claw, so as to help Jimmy advance his career and hone his skills. Indeed, nearly all of Jimmy's adventurers and allies were in some way all part of the Atlas Foundation's machinations.[1]

One such adventure was prompted by the Yellow Claw's kidnapping of President Eisenhower in 1958. Authorized to assemble a special rescue team Department Zero, Woo reviewed his files on active super-beings and instinctively selected a roster that came to him in a dream: Gorilla Man, Venus, Marvel Boy, and aquatic heroine Namora. Namora declined to join the mission but found a replacement by helping Woo salvage the lost Human Robot. Meshing smoothly as a team, Woo's "Department Zero" rescued Eisenhower and accomplished various other missions, repeatedly clashing with Atlas Foundation agents and pawns such as the mutated canine cosmonaut Laika; however, U.S. authorities ultimately decided the world was not ready for such bizarre heroes and disbanded the group, declaring their missions classified.[2]

In recent years, now an agent of S.H.I.E.L.D., Jimmy longed for the action in his youth. On his last mission for S.H.I.E.L.D., Woo went rogue, leading a team of agents into the San Francisco branch of The Atlas Foundation. Inside the facility, they find a secret room and the team is all killed except for Woo. He is found by S.H.I.E.L.D. and taken back to a S.H.I.E.L.D. facility with very little brain function and on life support. Dugan brought in Gorilla Man for questioning as the only clues they had linked this mission to the original G-Men and Hale was the only member they could contact. With no knowledge of what Woo had done, Hale requested to say a final goodbye, but Hale instead contacted M-11 and Marvel Boy who rescued him. Marvel Boy was able to restore Woo by reconstructing him as he last remembered Woo, which was from there time together in the 1950's. This restored his youth, at the expense of Woo's memories of the intervening 50 years.[2]

The quartet traveled to Woo's house for clues and find's Derek Khanata already there. After taking Jimmy Woo's Car and Marvel Boy taking an imprint of the house, the G-Men attempted to leave without Khanata but Khanata reveals he has discovered the whereabouts of Venus. Travelling with the group to Africa, the G-Men met Khanata's cousin, who found Venus at the site of Gorilla Man's transformation, having turned the war torn area peaceful. But soon after their arrival Yellow Claw attacked the group.[3]

After a small scuffle Yellow Claw was revealed to have been a robot and Jimmy was rescued by his team-mates. Leaving Africa with Venus, the team return to where Jimmy was initially injured in hopes of finding a temple, however they find nothing. Leaving M-11 behind, Woo and team travel to an old coffee shop Woo used to visit, Gorilla Man reveals M-11 visited him before SHIELD did to inform Hale that he needed to rescue Woo and Marvel Boy revealed his origins and how there was a second version of himself. As the story concludes, the team sees M-11 trying to travel to Antarctica since he has concluded that Namora isn't dead and needs to be rescued. Travelling there they found what appeared to be the remains of Namora.[4]

Namora was revealed to be alive by Marvel Boy and while M-11 freed Namora, the rest of the team were attacked by giant crabs and were rescued by a newly revived Namora. Feeling that he has taken his team away from their lives, Jimmy tries to send the rest of the team home but they all refused and plan to continue helping him investigating. Using a list complied by Woo before he lost his memories, they began to investigate all possible operations of the Atlas Foundation, with every single site they visit being one. After taking down some pirates, the team is attacked again by Yellow Claw and his terracotta army, in the fight Yellow Claw escaped and not even Grayson could detect his presence. After the attack Jimmy confided in Khanata that he suspected on his team to be a traitor.[5]

During the search, Namora revealed the secret of Venus' true nature, having known of the legend of the Siren. Venus fell into depression and filled all of her companions with despair. This caused Marvel Boy to reveal the fact that Jimmy suspected M-11 of being the traitor in the midst. While the rest of the team began to fight each other, Woo calmed her and was able to help her rediscover her confidence. Venus has finally reconnected with her past life and regained all of the abilities she possessed as a naiad. Venus proceeded to sing, soothing the rest of the team and they returned to their mission to take down the Atlas group. However, M-11 still wanted revenge against Marvel Boy for attacking him, and was only stopped when Jimmy stood in his way, and asked M-11 to sever his connection to Yellow Claw. M-11 then revealed the missing information on how to find the hidden temple.[6]

Woo and his team go back to the San Francisco branch of Atlas and re-enter the hidden room. This time, they survive and confront Yellow Claw and Mr. Lao. It turns out that Yellow Claw was waiting for Woo to come, to claim the mantle of Genghis Khan. With the title of Great Khan, Woo also assumed control over the holdings of The Atlas Foundation. Jimmy then asked Khanata to lie to S.H.I.E.L.D. and tell them that they actually perished in the temple so they can continue in secret.[1]

The transition away from being a criminal organization was not easy however as one of the the early missions after becoming the Atlas Foundation involved a rogue faction of the organization who did not want to stop their criminal activities. Using a theatre production they would use the audiences life force, combined with totemic vessel to create an army of Monsters. The group teamed up with Spider-Man to stop them, after him and the group were attacked. Initially unsure which side the group was on Spider-Man fought with Gorilla Man until Siren used her song to calm him down. Teaming up, they stopped the rogue faction when M-11 destroyed their power source at the Rockefeller Center. In order to keep. their existence a secret, Marvel Boy wiped everybody but his teams memory of the incident including Spider-Man's.[7]

During the Secret Invasion, Namora killed a Super Skrull and was captured by other Skrulls. She was later rescued by Gorilla Man and M-11, and returned to Marvel Boy's Ship with a Skrull as a hostage. Dissecting the hostage, Marvel Boy learns the secrets of the Skrull invasion just as their location is discovered, the team defends the ship and Jimmy asks Venus to us her powers the kill the attackers. Venus doesn't want to use her powers to kill and Martian Boy reveals that the Skrulls are not malevolent and just want to join the human and skrull race together. Jimmy however, is defending the human race and gets M-11 to wipe out all the attacking Skrulls.[8]

The Atlas Foundation hindered the Skrulls' activities on the West Coast during their Invasion. Afterwards, however, the world had changed, and Woo and his team took a surprising step: to use Plan Chu's villainous reputation to present themselves as the Agents of the Atlas Empire. Their first act was to steal all the gold in Fort Knox, which Norman Osborn had earmarked for special weapons programs.[9]

Then presenting themselves as valuable allies, offering to build Osborn weapons in a floating factory in the Hudson River. However, they are also letting the underworld know that Atlas is active, waiting for a hero or the authorities to come shut the factory down.[10]

The Agents of Atlas successfully form an alliance between Namor McKenzie and the Atlanteans when Namora and the Sub-Mariner express their love and decided to marry. Despite Namor's pleadings, Namora decides to join the Agents of Atlas to further their goals. After Jimmy Woo learns of the location of his old love Suwan, now the Jade Claw, leader of the Great Wall. His visit ends up breaking an ancient treaty between the Atlas Foundation and the Great Wall that was unbeknown to Woo. Despite his love for Suwan, the Jade Claw's relentless assault on the Atlas Foundation's operations leaves him and the Agents no choice but to end her rule. After Suwan's defeat, Woo leaves Temujin in charge of the Great Wall as a new Asian branch of the Atlas Foundation.[11]

Retrieved from "https://marvel.fandom.com/wiki/Agents_of_Atlas_(Earth-616)?oldid=5885873"
Community content is available under CC-BY-SA unless otherwise noted.