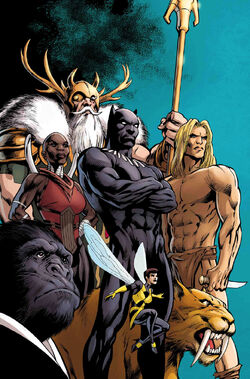 In order to protect a world that seems so determined to tear itself apart in an ever-increasing variety of ways, the Avengers require an entirely new support staff. (...) If the Avengers are the hammer, the Agents of Wakanda will be the hand that holds the nail.

The Agents of Wakanda were assembled by newly-appointed Avengers chairman Black Panther to serve as a support crew for the team, helping both run the Avengers Mountain and collecting intelligence for missions. The members were hand-picked by Black Panther and screened by Okoye, who served as the director of the Agents. The Agents of Wakanda's first missions involved gathering information on Namor's plans against the surface world, a vampiric civil war brewing in Transylvania, rescuing Blade and Michael Morbius from Dracula's forces in the process,[2][1] and the War of the Realms.[3]

Agents of Wakanda Jumpsuits and Wetsuits

Like this? Let us know!
Retrieved from "https://marvel.fandom.com/wiki/Agents_of_Wakanda_(Earth-616)?oldid=6005129"
Community content is available under CC-BY-SA unless otherwise noted.