Agents of the Cosmos 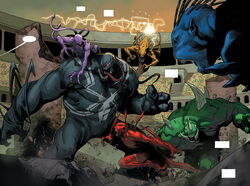 When the dark god Knull's control over his universe-conquering army of predatory eldritch parasites was severed by Thor Odinson, the symbiotes who had bonded to benevolent and noble hosts rebelled against him and sealed him away in an artificial planet formed from countless amalgamated symbiotes, which they named "Klyntar" after their word for "cage". In a desperate effort to expunge their dark past, the symbiotes of Klyntar perpetuated the lie that the natural state of their species was benevolence and that Klyntar was their homeworld.[1] As an act of redemption, the Klyntar symbiotes sought out worthy hosts from various species and established the Agents of the Cosmos, an organization of noble warriors capable of sensing the "voice" of the Cosmos and dedicated to maintaining peace across the universe.[3][4]

Unfortunately, some symbiotes found themselves bonded to unworthy hosts, who used their partners for malevolent purposes and re-corrupted them into bloodthirsty predatory parasites.[3][5] These corrupted symbiotes were cut off from the Klyntar hive mind, but were capable of replicating themselves through asexual reproduction and resumed their former master's campaign of conquest; spreading what the Klyntar declared false information in order to tarnish the reputation of their benevolent brethren.[3]

In response, the Klyntar hive mind developed a means of cleansing corrupted symbiotes by purging negative emotions and memories,[6] although the procedure is difficult and occasionally does not work, leaving incompletely cleansed symbiotes in constant danger of relapse.[7][8] Agents of the Cosmos whose symbiotes are in danger of succumbing to corruption are taken back to their homeworld, where their symbiote undergoes trial to determine its fate. Symbiotes that fail the trial are deemed lost and executed without mercy, and if the host is still deemed worthy they will receive a new symbiote and return to their duties.[7][8]

Loyalty to the Cosmos is valued above all, and Agents who rebel or dispute the decisions of the elder members can find themselves placed on trial to determine their worthiness.[8] What happens to Agents who are deemed unworthy is unknown, but it is implied that exile is a possible fate. The Space Knights, a rival organization, are condescending towards the Agents of the Cosmos for this practise.[6]

At some point following Agent Venom and Tarna's departure, the Agents of the Cosmos were attacked and wiped out by the Poisons,[9] though some survivors may have managed to escape.[10]

Retrieved from "https://marvel.fandom.com/wiki/Agents_of_the_Cosmos_(Earth-616)?oldid=5631294"
Community content is available under CC-BY-SA unless otherwise noted.