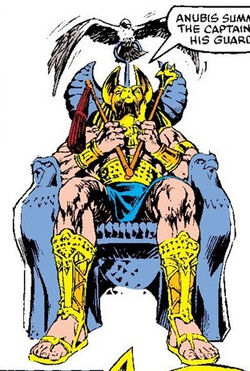 Ahmad Azis was said to be the reincarnation of Araamses, Priest of the Anubis, who tried to seize the Pharaoh's throne after Seti's death, but was captured and buried alive in Set's tomb. He claimed to have been revived alongside Moon Knight when Khonshu's light flooded the He dwelled among the Bedouin tribes, relearning the desert's ways. He grew strong, becoming a leader, sheikh of sheikhs. He converted all the treasures he could remember being buried and earned himself a vast fortune and built an elaborate temple.

Azis decided to obtain the statue of Khonshu, possessed by Marc Spector who was trying to auction it. Azis had his agent Khalid posion the expected top bidder Hiram Gowdy with cyninide gas, and then he bought the statue for four million dollars. He sent Khalid to kill Moon Knight defender, to prevent him from interfering with the next stage of his plan, but Spector got the better of him.

The statue was delivered to his island palace and Azis fully assumed the role of Anubis and initiated his plans to take over the world. Following the guidance of the Priests of Khonshu, Spector, as Moon Knight, traveled to Failaka Island, where he was overpowered by Azis' agents. Anubis the Jackal had Moon Knight bound in bandages and prepared to sacrifice him under the moonlight and used the lasers in his helmet to start the ceremony. Moon Knight managed to distract him talking long enough for the Moon Knight's strength to be enhanced by the Moon and he tore free from his wrappings. Moon Knight fought Azis but Azis eventually got the upper hand and knoacked down Moon Knight and prepared to incinerate him but Moon Knight managed to damage the helmet. Azis removed the damaged helmet just as a huge sandstorm mysteriously struck, causing the temple to collapse on Azis, burying him and all evidence of its existence. The only things left untouched were Moon Knight and Khonshu's statue.[1]

Gold helmet shaped like a jackal's head that fires lasers from the eyes.

Like this? Let us know!
Retrieved from "https://marvel.fandom.com/wiki/Ahmad_Azis_(Earth-616)?oldid=4857421"
Community content is available under CC-BY-SA unless otherwise noted.