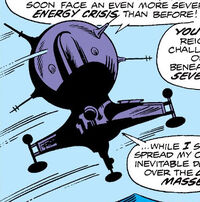 Doctor Doom developed this transatlantic spherical vehicle for stealth operations. The vessel flew too low to be detected by a radar and too fast to be seen by the naked eye, allowing Doom to travel openly through very populated cities undetected.

Doom used this craft once to meet with the Sub-Mariner. First Doom positioned the Air-Vessel over Atlantis, then called the Sub-Mariner's attention by sending android troops. The Sub-Mariner emerged and Doom opened his door, requesting his company and asking him to go to Latveria so that Doom could explain his idea. Namor agreed and the vessel crossed several countries before decking at Doctor Doom's Castle.[1]

Retrieved from "https://marvel.fandom.com/wiki/Air-Vessel?oldid=5288076"
Community content is available under CC-BY-SA unless otherwise noted.